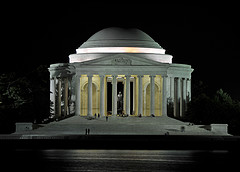 In an open letter explaining why he’s quitting the hedge fund business, Andrew Lahde makes an interesting comment regarding a way of changing the American governmental system with a view to making it less corrupt – model it on the Linux development process. [via SlashDot] [image by Tony the Misfit]

Capitalism worked for two hundred years, but times change, and systems become corrupt. George Soros, a man of staggering wealth, has stated that he would like to be remembered as a philosopher. My suggestion is that this great man start and sponsor a forum for great minds to come together to create a new system of government that truly represents the common man’s interest, while at the same time creating rewards great enough to attract the best and brightest minds to serve in government roles without having to rely on corruption to further their interests or lifestyles. This forum could be similar to the one used to create the operating system, Linux, which competes with Microsoft’s near monopoly. I believe there is an answer, but for now the system is clearly broken.

I think most of us can agree on the latter point, but I’m not sure about Ladhe’s idea of making the rewards of government service more attractive at baseline… but if it actually resulted in people who genuinely wanted to make a difference to the world (rather than just their bank balances) taking the reins of government, it’d be no bad thing.

Of course, how much respect you have for the political philosophy of a just-cashed-out hedge fund manager who made a fortune from the sub-prime crisis probably depends on how close to meeting your own monthly budget you are right now…

4 thoughts on “Open-source government – politics without the corruption?”