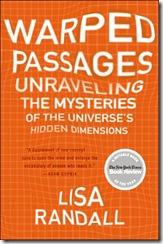 I like to post here (and yes, I do still post here, despite my occasional protracted absences…darn deadlines!) about those odd occasions when the theatrical world intersects with the science fictional or the scientific. But I don’t think I’ve ever run across anything quite like this: Lisa Randall, a theoretical physicist in Harvard’s Department of Physics, is writing an opera. (Via IdeaFestival.)

Randall is the author of a 2005 book called Warped Passages that, in the word of Samuel P. Jacobs, writing for the Boston Globe, “introduced nonscientific readers to the possibility of additional dimensions beyond the three we see, and how their existence could account for many of the physical world’s most perplexing phenomena.”

In response to that book Spanish composer Hector Parra, asked Randall if she would try writing a libretto for an opera about her work. Jacobs writes:

The resulting piece, a collaboration with the artist Matthew Ritchie, is scheduled to debut in Paris at the Georges Pompidou Centre this summer, then travel throughout Europe in the fall.

The opera is an intimate work – an hourlong show written for two performers – that carries uncomfortable ideas about our world and how we experience it. The piece has the puzzling title of “Hypermusic Prologue: A projective opera in seven planes,” the seven planes referring to space and to the opera’s seven acts. The work’s broader goal is to suggest new approaches to both science and art. The old-fashioned form of opera, Randall and her colleagues hope, can become a vehicle for modern science, using sound and voice to re-create the many dimensions that physicists now explore.

“It’s kind of mathematical, it is geometrical, and it is looking towards the future,” Randall, 46, says of the title.

Read the whole interview with Randall.

And if anyone actually sees the opera, let us know what you think!

One thought on “"Hypermusic Prologue: A projective opera in seven planes"”