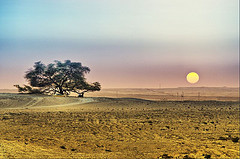 Does the Earth harbour forms of life unrelated to the carbon-based DNA-powered stuff we know about? “Impossible,” you might say, but as pointed out by astrophysicist Paul Davies, we wouldn’t know – because we’ve never looked for it.

The tools and experiments researchers use to look for new forms of life – such as those on missions to Mars – would not detect biochemistries different from our own, making it easy for scientists to miss alien life, even if was under their noses.

Alternative biochemistry is inherently a speculative field, which is why it has made plenty of appearances in science fiction – Rudy Rucker has dealt with similar ideas before, for example, and Futurismic columnist Mac Tonnies has theorised about the potential of Earth being home to beings we are not able to recognise as such.

Finding examples of alien life here on Earth might add credence to theories like panspermia – but, more importantly, it would suggest that the likelihood of life developing elsewhere in the universe is closer to one than to zero. [via SlashDot; image by Haeroldus Laudeus]

2 thoughts on “Does the Earth harbour a ‘shadow biosphere’?”