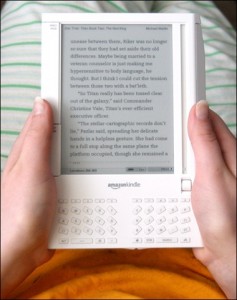 We’ve been mentioning ebooks a lot lately here at Futurismic, as the big publishing companies have suddenly woken up to the fact that the 21st Century has well and truly arrived… and isn’t going to go away.

One can look at the ebook as a way for the publishers to move away from the increasingly expensive and wasteful dead-tree model and reinvigorate themselves in the process. But there is a flipside, of course, as pointed out by The Guardian‘s Naomi Alderman:

… if ebook readers took off, big-name authors such as [Stephen] King may be able to move to self-publishing. And that could mean the end of our current publishing system. Because of the way the publishing business is structured, big-name authors who sell millions of books are, in effect, supporting the industry. I’ve heard various estimates of the percentage of books that actually turn a profit. One agent I spoke to said 95% of published books make a loss. Others have put the figure lower. Either way, everyone agrees that a large majority of profits come from a small minority of authors.

If King, Dan Brown, JK Rowling and Patricia Cornwell were all to decide to move to selling their books online themselves, rather than going through a publisher, they’d certainly benefit financially. Typically, an author only receives about £1 for every copy of their book sold. Rather than relying on a publisher, big-name authors could afford to simply employ an editor, a PR person, a typesetter and a designer. They could price their books at only £2 or £3 and still make much more money than under the current system.

There’s obviously a few flaws in Alderman’s reasoning here: first of all she’s discounting the nurturing aspect of the publishing industry, its ability to bring the next generation of Kings, Cornwells and (universe forfend) Browns up through the ranks; secondly, a shift to ebooks should see the loss margins on a title by a smaller author drop considerably, as there’ll be no massive pile of unsold books to pulp (not to mention much smaller distribution costs).

But what is plain is that book publishing needs to learn in adavance from the messy lessons that the record companies are still struggling with now. A look at the music industry blogs will show you that Alderman’s speculation above is an almost perfect mirror of what’s already happening with middle-band musicians as they (and their fanbase) realise the labels are primarily concerned with wringing the last few drops of profit out of a dead business model, and decide to leave them behind.

As has been pointed out before, the principle difference between the publishers and the record labels is that publishers haven’t yet been forced to innovate by the pressures of piracy. It looks as if they’d be wise to jump ship and start swimming for shore right now, rather than waiting to be made to walk the plank. [Image coutesy Wikimedia Commons]

10 thoughts on “Stephen King, Amazon’s Kindle and the death of publishing as we know it”