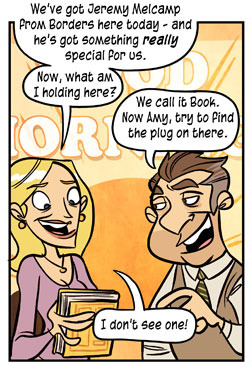 I suppose I shouldn’t be, but I can’t help feeling surprised at how widespread the debate about ebooks is becoming – I honestly didn’t expect so many people would care so soon. Penny Arcade‘s take is unsurprisingly snarky [see right], but also somewhat conservative given their games’n’gadgets leanings (even allowing for comic license).

The best thing about the breadth of the discussion is that we’re getting a whole lot of different perspectives beyond authors and book-nerds. For example, The Big Money gives us the business logistics guy’s view, namely that “[d]igital readers will save writers and publishing, even if they destroy the book business”:

Here’s where the Kindle comes in. The collapse of bookstores almost ensures that the Kindle will thrive. Not because it’s better than a book; that doesn’t matter. The nation-within-a-nation that reads for pleasure and to be informed is a small but vibrant republic. Heavy readers make up a large portion of the book-buying public. These are people who read two to three books a week and buy 50 or so books a year. The Kindle will solve a number of problems for the citizens of Biblandia, not the least of which is having to go find a bookstore to get their next read.

The Kindle, like the iPod, is an emerging critical mass device that actually encourages people to pay for content rather than get it for free. When Apple launched the iTunes Music Store, people were skeptical that people would shell out cash for music they could snag for free from file sharing networks. They did. The same was true when Apple, and later others, rolled out movies. However, today millions rent or buy movies online.

The Kindle offers a similar experience in a much larger market – text. This one is tougher to monetize. In the digital age books have managed to remain premium content. However, beyond books, magazine and newspaper content is available in abundance online for free. Yet, I still believe that people will pay to receive some of their favorites on their Kindles or their Kindle-enabled phones. Meet them there now while you can.

And of course, there’s the segment of the publishing industry that has gotten itself beyond denial and/or arm-flapping to the point of grappling with the potential that’s sat on their doorstep. Rather than dismissing ereaders as imperfect implementations, the Pan Macmillan digital team are looking ahead to what they see as an inevitable “iPod moment” for text:

… the iPod had a phenomenally intuitive control, especially given the bemusing buttons and rollers of it’s competitors (and I should know as I held out for some time, before caving in with a combination of resignation and glee). Characteristic of it’s manufacturer this no doubt has been an enormous boon to the device. Beyond that though the now iconic look from legendary Apple designer Jonathan Ive was what made us want one. The iPod wasn’t just useful, fun etc- it was jaw grindingly desirable.

What strikes me as being the interesting parallel with these two, aside from the the slightly obvious observations just outlined, is that both came from behind. They did not have first mover advantage. Instead they used these design concepts to leapfrog into pole. Indeed, it could be argued that precisely not coming first was an advantage in that it allowed the pair to fine tune their product and get these two crucial areas right.

Going back to the ereader then, I get the sense that we are on the cusp of when useability and covetability collide, uniting in a glorious burst of reading device nirvana. Ok maybe not quite, but once those user interfaces have been tweaked, and once someone like Ive gets there hands on a reading device, they will be back.

So we’re not quite at the “all bets are off” stage, but we’re certainly beyond the point where it’s a few evangelists with sandwich-boards prophesying the end-times. The more I look at it, the more I suspect that with ebooks the question is no longer “if?” but “when?”

What about you lot – how many of you have a reader already, and how has it changed your text media consumption? And for those that don’t have one, what will be the change that makes you cross the line?

8 thoughts on “Progress – the ebooks debate rumbles on”