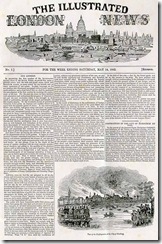 Newspapers are struggling everywhere; there have been a few posts on the subject here at Futurismic already. In Denver, the 150-year-old Rocky Mountain News recently ceased publication. The Seattle Post-Intelligencer has gone to an online-only version. And here in Canada, Canwest, which owns 13 daily and 26 community newspapers across the country, is so strapped for cash it’s ordered my own local newspaper, the Regina LeaderPost, to cut back on the work it doles out to freelancers. I should know, since my weekly science column, for which I was paid a paltry $25 a week, has been axed. Apparently the $1,300 a year that had been coming to me will make all the difference in stemming the tide of red ink. (I’m still writing the weekly column, by the way; it clings to life in a couple of smaller papers and you can read it on my blog or get it sent to you via email, if you’re interested.)

According to science writer Steven Johnson, however, speaking at the South By Southwest Interactive Festival in Austin, Texas, the lingering death-throes of newspapers will not spell the end of journalism. (Via PhysOrg.) Instead:

Steven Johnson equated newspapers to old growth forests, saying that under the canopy of that aged ecosystem blogging, citizen journalism, Twittering and other Internet-age information sharing is taking root.

“I’m bullish on the future of news,” Johnson said.

Johnson says the problem is that changes that should have happened over a decade are being crammed into a much shorter time frame, partly due to pressure for the global economic situation.  Johnson says the solution is to “stop killing trees” and “stop wasting information freely available online,” adding that “The business model sure seems easier to support if the printing goes away.” (Remember: it would be cheaper for the New York Times to give each of its subscribers a Kindle than to print the newspaper.)

Johnson sees a future in which news weaves together the talents of professional journalists, bloggers, Facebookers and Twitterers. According to Johnson, the information mix will include direct online streams “such as webcasts from high-profile people such as US President Barack Obama.” (Forget webcasts, actually. Sounds like all you really need to do is hook his teleprompter up to stream his speeches in real-time to the ‘Net.)

Appropriately, Johnson has posted his entire speech on the topic to his own site.

International Data Group (IDG) chairman Patrick McGovern agrees; his company, which operated in 95 countries, owns some 450 publications, including PC World and InfoWorld, and many of them are only available online. “Print editions are yesterday’s news,” he says. “If it is news, people want to hear it as soon as they can.”

“Find out the scandal in the mayor’s office; what the police are up to, and those other things that people love to talk about,” McGovern said. “It is easier and much less costly to put it online.”

I’m a journalist by training and a former reporter, editor, photographer and cartoonist for a weekly newspaper. I’ve always loved newspapers. I don’t care about the medium of delivery; I just want them to survive. But I’m not sanguine about the willingness of readers to ante up, even for local content. Nor am I confident the people running the newspapers yet grasp that local dailies no longer need to cover national and international news to the extent they once did, and that their core product, their “killer app,” is local content.

The end of my newspaper column in Regina after almost two decades is proof enough of that.

Um, not that I’m bitter or anything.

(Image: FIrst edition of the Illustrated London News, May 14, 1842, via Wikimedia Commons.)

One thought on “Do newspapers have a future?”