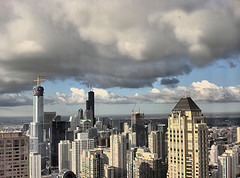 A provocative headline, no? I wish I could say it was my own invention, but I can’t, because the Washington Post got there first:

So contend Bruce Katz, Mark Muro and Jennifer Bradley in the latest issue of the journal “Democracy.” The United States is not a single unified economy, they say, nor even a breakdown of 50 state economies. Instead, the country’s 100 largest metropolitan regions are the real drivers of economic activity, generating two-thirds of the nation’s jobs and three-quarters of its output. The sooner we reorient federal economic policies to support this “MetroNation,” the quicker we can fix the mess we’re in.

I’ll freely admit I don’t know enough about economics to tell whether Katz Muro and Bradley are actually right about that, but it makes a certain amount of sense… mapping economic activity like wi-fi signals, at their strongest near to the biggest routers. Maybe withdrawing economic focus from rural areas would make sense… but I can’t see it being a popular idea with people who live there. [via Bruce Sterling; image by doug.siefken]

2 thoughts on “The US economy is a myth”