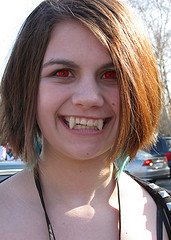 Ever wondered why there aren’t more vampires around? Why more people haven’t seen one? You’re not alone – Laura McLay applies stochastic equations to the possible population fluxes of vampires and determines that they’d either over-run the planet or die out in short order:

I have yet to see a vampire movie that implicitly assumes that there is a reasonable model for vampire population dynamics (using a stochastic process framework or something else). And frankly, I’m pretty disappointed. Until I am offered a reasonable explanation for why there aren’t more vampires, I won’t be able to jump on the vampire bandwagon. If I had free time, maybe I would write a mathematically consistent vampire novel.

Please don’t bother, Laura. Maybe you could write a mathematically consistent novel about a genre trope that hasn’t been relentlessly flogged to death over the last decade instead?

5 thoughts on “Malthus and the vampires”