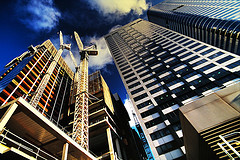 Jamais Cascio has been doing what futurists do best – speculating on the near-term changes that need to be made to haul our asses out of the economic hole they’re in and, hopefully, ensure we don’t end up stuck there again.

Of course, the web is full of people doing the same thing, making pretty much every website (this one included, to be fair) a shower of competing ideas and ideologies (of varying degrees of sanity). What’s interesting – and perhaps more reasonable – about Cascio’s approach is that he isn’t adhering to either of the standard polar opposites of socialism and capitalism; he’s attempting to synthesise the two in this report from an imaginary future a few decades away:

Traditional capitalism was, arguably, driven by the desire to increase wealth, even at the expense of other values. Traditional socialism, conversely, theoretically wanted to increase equality, even if that meant less wealth. But both 19th/20th century economic models had insufficient focus on increasing resilience, and would often actively undermine it. The economic rules we started to assemble in the early 2010s seek to change that.

Decentralized diversity (what we sometimes call the “polyculture” model) means setting the rules so that no one institution or approach to solving a problem/meeting a need ever becomes overwhelmingly dominant. This comes at a cost to efficiency, but efficiency only works when there are no bumps in the road. Redundancy works out better in times of chaos and uncertainty — backups and alternatives and slack in the system able to counter momentary failures.

Some food for thought there, no? It’s informed by the networked and distributed technologies which surround us, but lacks the idealistic tang of utopian thinking… and compromise seems like a good idea from where I’m sitting, at least.

And while we’re talking about major upheavals to the way we do stuff nowadays, how about open source healthcare?

… in healthcare, state intervention artificially skews the model of service toward the most expensive kind of treatment. For example, the patent system encourages an R&D effort focused mainly on tweaking existing drugs just enough to claim that they’re “new,” and justify getting a new patent on them (the so-called “me too” drugs). Most medical research is carried out in prestigious med schools, clinics and research hospitals whose boards of directors are also senior managers or directors of drug companies. And the average GP’s knowledge of new drugs comes from the Pfizer or Merck rep who drops by now and then.

In an open-source healthcare system, someone might go to vocational school for accreditation as the equivalent of a Chinese “barefoot doctor.” He could set fractures and deal with other basic traumas, and diagnose the more obvious infectious diseases. He might listen to your cough, do a sputum culture and maybe a chest x-ray, and give you a round of zithro for your pneumonia. But you can’t purchase such services by themselves without paying the full cost of a college and med school education plus residency.

That’s a bit more extreme (or at least more detailed and close-focussed) than Cascio’s vision, but they both depend on a degree of decentralisation, with local systems picking up the slack where national institutions have failed. Given the increasing urbanisation of the world’s population, maybe devolving some governmental systems to independent local nodes would provide the flexibility we need to deal with these times of rapid change. [image by mugley]