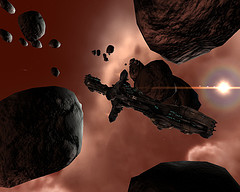 Courtesy of Jamais Cascio, here’s just another reminder of the fact that we live in a very strange world that gets stranger by the day. Point in case: the wrecked economy of Iceland is less real that that of the online space RPG EVE Online:

The in-game currency of EVE Online is the ISK. That’s right, the Icelandic króna. And where most multiplayer games have attempted to ban the translation of in-game assets to and from real-world money, EVE Online has not only permitted it but actively embraced it – so much so that daily speculation on world/game financial leverage is conducted openly on the official game web boards. As a result, the EVE Online ISK has remained fairly stable against virtually all the real currencies of the world for a few years now, fluctuating but not spiking, not crashing. There are people out there making an income, a real-life income, just handling the trades on the “floor”.

All of which is to say: Iceland has collapsed so thoroughly that at this point, it’s only economically viable export may very well be an internet spaceship game, and that internet spaceship game’s króna is for all intents and purposes a more real and valid and valuable currency than the actual country’s actual money.

Strange stuff is afoot in the Global Village, no? [image by Psycho Al]