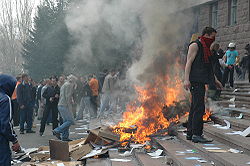 Until last week you’d probably have been forgiven for thinking that Moldova was the country to which expensive tasks are outsourced in the Dilbert cartoons. Well, forgiven by anyone but a Moldovan, perhaps. [image from Wikimedia Commons]

But now Moldova has joined the ranks of former Soviet Bloc countries who’ve had a revolution or political upheaval that was enabled by modern social media and communications technology… and because a good headline always fits nicely into the Zeitgeist, it’s been billed as “the Twitter revolution”. That’s probably a gross oversimplification, though:

It seems unlikely, though, that Twitter was the key tool in a victory of “technology over tyranny”, if that is, in fact, what happened. For one thing, the Communist party in Moldova doesn’t have much in common with the Communists of old – Moldovan communist favor foreign direct investment and promoting entrepreneurship, though they’d like closer involvement with Russia and less with Romania. But to the extent that this was a technological “triumph”, it may have more to do with other social network tools – including blogs, LiveJournal and Facebook – than with Twitter.

Well, even if Twitter can’t take all the credit, hurrah for the inherently democratic potential of modern communications, right? Nicholas Carr would like you to hold on just a moment, though:

No doubt, the Moldovan protests will be used as an example of how the Net and, in particular, its social-networking and personal-broadcasting functions can be used to support popular uprisings and, more generally, the spread of democracy. And rightfully so. But before anyone gets carried away by the idea that the Net is a purely democratizing force, it would be wise to read a longer essay by Morozov, titled Texting Toward Utopia, in the new issue of Boston Review.

I tend to read things that Carr says are worth reading; he’s usually right. So here’s a snippet from that Morozov essay:

Much of the encouraging reporting may be true, if slightly overblown, but it suffers from several sources of bias. As it turns out, the secular, progressive, and pro–Western bloggers tend to write in English rather than in their native language. Consequently, they are also the ones who speak to Western reporters on a regular basis. Should the media dig a bit deeper, they might find ample material to run articles with headlines like “Iranian bloggers: major challenge to democratic change” and “Saudi Arabia: bloggers hate women’s rights.” The coverage of Egyptian blogging in the Western mainstream media focuses almost exclusively on the struggles of secular writers, with very little mention of the rapidly growing blogging faction within the Muslim Brotherhood. Labeling a Muslim Brotherhood blog as “undemocratic” suggests duplicity.

The point being that the Internet is just a tool; the democratizing force is a result of us expressing ourselves through it (and seeing our own reflection in the mirror).

Even so, it can’t be discounted entirely that the Internet and mobile phones have presented the opportunity for networked action and communication to people who even comparatively recently were unable to use technology to circumvent the controls of their governments. Which political cause is the “good” side of any such equation is, as always, a very subjective question.

2 thoughts on “That Twitter revolution – is the web inherently democratic?”