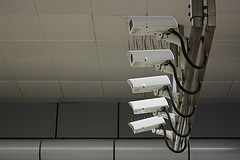 Dubai may be Ballardian, but my own country of residence is becoming increasingly Orwellian – so much so that to say so is becoming a cliche that even the most conservative of media outlets seem happy to use. Here’s the latest development in the Surveillance State: a CCTV system for watching CCTV operators. Seriously. [image by eduardoizquierdo]

The system uses webcam-style cameras trained on the irises of the CCTV operators. From this, software works out where the operators are looking as they stare at each monitor – and the areas they have not been paying attention to. From this it creates a video of what they missed, for them and their bosses to watch at the end of their shift.

If we can’t trust the CCTV operators to catch everything, what’s the point in having them? If you can make a system that can automatically determine what a fallible meatbag passed over, why bother having the meatbag as middleman at all – just repurpose the same algorithmic prowess and make the panopticon fully automated.

Then the next step is obviously to deploy robot policemen, so that when they run amok and start beating peaceful protestors you can blame a software glitch (or maybe anarchoterrorist hackers OMFG!) and be saved the embarrassment of having the whole business dragged through the courts. And hey, why stop there? Let’s automate the judicial process as well – the less time, expertise and effort spent on controlling the proles the better.

If you’re determined to drive all the way to hell, you might as well step on the gas instead of gawping at the bloody scenery.