I’ve mentioned before that everyone should follow Geoff Manaugh’s BLDGBLOG, and this post pretty much sums up why; Manaugh manages to find the weirdest and most wonderful ideas from the fringes of architecture and interprets them with the mind of a life-long science fiction fan.

Sometimes, however, it doesn’t take him much interpretation or extrapolation to get straight into sensawunda territory, and Magnus Larsson’s “arenaceous antidesertification architecture” is a prime example. Take it away, Mr Manaugh:

Larsson’s project deservedly won first prize last fall at the Holcim Foundation’s Awards for Sustainable Construction held in Marrakech, Morocco. One of the most interesting aspects of the project, I think, is that this solidified dunescape is created through a particularly novel form of “sustainable construction” – that is, through a kind of infection of the earth.

Larsson has proposed using bacillus pasteurii, a “microorganism, readily available in marshes and wetlands, [that] solidifies loose sand into sandstone,” he explains.

But the idea of taking this research and applying it on a megascale – that is, to a 6,000km stretch of the Sahara Desert – boggles the mind. At the very least, the idea that this might be deployed for the wrong reasons, or by the wrong people, in some delirious hybrid of ice-nine, J.G. Ballard’s The Crystal World, and perhaps a Roger Moore-era James Bond film, deserves further thought.

Indeed it does… but take a look at the concept art for the project (of which there is more in a Flickr set). Even before you start thinking about potential misuse, you can’t help but be impressed by the sf-nal visual impact of the idea. 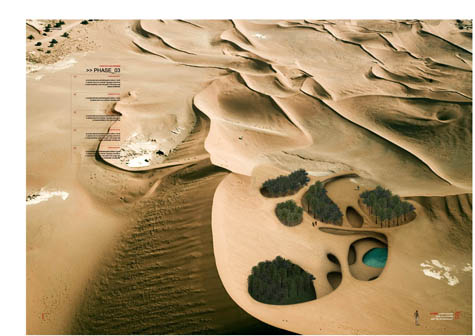 You’d be best off reading the whole of the BLDGBLOG post for the low-down on how this concept would work (and then Larsson’s paper itself, from which the above image is borrowed), but here’s an excerpted explanation from Larsson himself:

The piles would be pushed through the dune surface and a first layer of bacteria spread out, solidifying an initial surface within the dune. They would then be pulled up, creating almost any conceivable (structurally sound) surface along their way, with the loose sand acting as a jig before being excavated to create the necessary voids. If we allow ourselves to dream, we could even fantasise about ways in which the wind could do a lot of this work for us: solidifying parts of the surface to force the grains of sand to align in certain patterns, certain shapes, having the wind blow out our voids, creating a structure that would change and change again over the course of a decade, a century, a millenium.

Beautiful? Undoubtedly. Practical or plausible? I really have no idea… but I don’t think there’s any harm in admiring a magnificent idea for its own sake every once in a while. After all, that’s one of the pillars of science fiction, isn’t it?