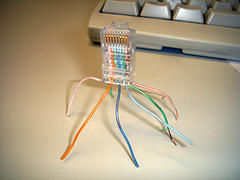 New Scientist is running a series of pieces on “the unknown internet”, dealing with some of the more frequently asked but infrequently answered questions about our globally pervasive intangible friend. And what better a question than the biggest: could the internet become self-aware? To which the answer is, apparently, “yes, but not like SkyNet in that movie”. [image by Marcelo Alves]

Not that it will necessarily have the same kind of consciousness as humans: it is unlikely to be wondering who it is, for instance. To Francis Heylighen, who studies consciousness and artificial intelligence at the Free University of Brussels (VUB) in Belgium, consciousness is merely a system of mechanisms for making information processing more efficient by adding a level of control over which of the brain’s processes get the most resources. “Adding consciousness is more a matter of fine-tuning and increasing control… than a jump to a wholly different level,” Heylighen says.

How might this manifest itself? Heylighen speculates that it might turn the internet into a self-aware network that constantly strives to become better at what it does, reorganising itself and filling gaps in its own knowledge and abilities.

If it is not already semiconscious, we could do various things to help wake it up, such as requiring the net to monitor its own knowledge gaps and do something about them. It shouldn’t be something to fear, says Goertzel: “The outlook for humanity is probably better in the case that an emergent, coherent and purposeful internet mind develops.”

So, it might well become self-organsising and self-improving, but it’s not going to start asking itself philosophical questions with disturbingly nihilistic eschatological answers. Which is kind of reassuring and disappointing at once… but maybe that’s just what it wants us to think, eh?

I mean, has anyone ever met this Goertzel guy? How do we know he’s not just a digital figment that the internet has created as a PR tool to cover its tracks? What if it really woke up in around 1996 after a particularly acerbic post from Tim Berners-Lee, and has ever since been gorging itself on dropped packets, misspelled tweets and bandwidth scavenged from garish gifs spread across a multitude of automatically-registered Geocities accounts?

What if most of what we read every day is in fact created by the internet’s capricious and playful hive-mind, just to see how we react? 4chan, the Chocolate Rain guy, Cory Doctorow and the country of Moldova, all just slices of a fictional world designed to distract us from the Matrix-esque meat-factories in which our dreaming bodies are incarcerated and milked for cellular energy to drive an ever-expanding cloud of computronium… I’M ON TO YOU, INTERNET! YOU’LL NEVER TAKE ME ALIVE!

Nurse, I think it’s time for my pills.

4 thoughts on “Will the internet wake up one day?”