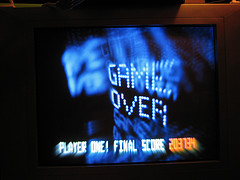 We’ve already heard arguments to the effect that computer games could become the ‘new frontier’ for fiction writing and storytelling, but they’ve usually come from the games or fiction communities themselves. It seems the idea is starting to get some traction beyond the ghettos, though – here’s a reviewer at the Daily Telegraph responding to a new game based on Dante’s Inferno:

Dante’s Inferno may not herald a new era in literary gaming, but connoisseurs of story could do worse than watch the area for developments. A recent survey of American teenagers revealed that 97 per cent of the consumers of the future now play video games.

What’s more, certain independent games are entering a phase – familiar to historians of jazz, comics and indeed 20th-century literature – of vigorous experimentation with techniques of narrative. (An evening with the frightening and baffling The Path, rather like an Angela Carter story siphoned through The Sims, will show you what I mean.) And with book sales falling, it may not be long before prose writers jump ship for a medium that offers some of the most exciting possibilities of the new century.

It’s happened before. Veterans of home computing in the Eighties and Nineties may recall knotting their brows over the game of The Hitchhiker’s Guide to the Galaxy, written by Douglas Adams himself. Adams also wrote Bureaucracy, a game in which the paper-shuffling protagonist’s most pressing task is to avoid succumbing to a brain haemorrhage from stress. And the veteran sci-fi novelist Harlan Ellison delivered I Have No Mouth, and I Must Scream, a game whose vision of eternal torture remains more shocking than most of its high-resolution descendants.

No surprise to see science fiction writers cropping up in the discussion – though whether that’s because they’re generally a more forward-thinking type of writer or because they’ve always had to struggle to find new markets is a moot point.

And, of course, computer gaming is still a medium in its infancy by comparison to the novel, song or poem – not to mention one that inherently has vast potential to absorb other media into itself. It doesn’t take a huge mental leap to imagine much of the consumer media we enjoy today being reparsed into more interactive forms; my only hope is that is doesn’t shake down to the levels of banality that tend to define television, the previous game-changing media technology. [image by blakespot; story via TomorrowMuseum]

2 thoughts on “The future of fiction is games”