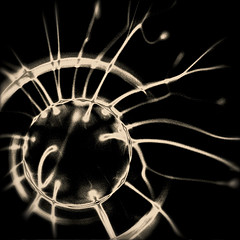 A fascinating article in New Scientist on neural prosthesese and the possibility of a new source of inequality: between those who can afford to pay for technological mental enhancements and those who cannot:

People without enhancement could come to see themselves as failures, have lower self-esteem or even be discriminated against by those whose brains have been enhanced, Birnbacher says. He stops short of saying that enhancement could “split” the human race, pointing out that society already tolerates huge inequity in access to existing enhancement tools such as books and education.
…
The perception that some people are giving themselves an unfair advantage over everyone else by “enhancing” their brains would be socially divisive, says John Dupré at the University of Exeter, UK. “Anyone can read to their kids or play them music, but put a piece of software in their heads, and that’s seen as unfair,” he says. As Dupré sees it, the possibility of two completely different human species eventually developing is “a legitimate worry”.

But the news is not all bad, with the observation that the human brain is becoming ever more plastic and capable of adaptation:

Today, our minds are even more fluid and open to enhancement due to what Merlin Donald of Queens University in Kingston, Ontario, Canada, calls “superplasticity”, the ability of each mind to plug into the minds and experiences of countless others through culture or technology. “I’m not saying it’s a ‘group mind’, as each mind is sealed,” he says. “But cognition can be distributed, embedded in a huge cultural system, and technology has produced a huge multiplier effect.”

It is interesting to speculate what the long-term consequences of dense technological interconnectedness will be on the human condition. Even assuming actual precise neuroengineering proves difficult, neural prosthesese offer a world of opportunity.