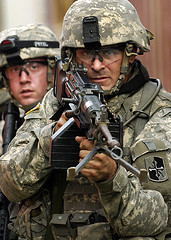 Nothing says “futuristic” quite like new tools and techniques of warfare, which probably says something rather sad about our socio-cultural mindsets. Nonetheless, there’s no ignoring the fact that technological advances are changing the state (and nature) of the battlefield more quickly than ever before, meaning that military organisations the world over are looking for any possible way to get a jump on the other side.

Enter the US National Academies of Science, who were hired by the US military to assess the neuroscientific investment paths that would provide the best bang for their buck. It’s not about bigger guns and better armour any more, though; the soldiers themselves are the latest subject for improvement, be it by careful recruitment selection or wetware upgrades, or both.

Genetic testing might also enable recruitment officers to determine which soldiers are best for specialist jobs. For example, by combining psychological testing with genetic tests for levels of brain chemicals, a clearer picture of a soldier’s competencies might shine through. “We might say that given this person’s high levels of brain serotonin, they’re going to be calmer under pressure, so they might make a good sniper,” says Paul Zak of Claremont Graduate University in California, who was on the NAS panel. Alternatively, someone with low dopamine might be less likely to take risks, he says, and therefore be better suited as a commanding officer in a civilian area.

Zak emphasises that the panel was not asked how to turn soldiers into better “killing machines”, although “the whole purpose of maximising and sustaining battlefield capacity is to gain superiority over opponents”, admits Floyd Bloom of the Scripps Research Institute in La Jolla, California, who chaired the panel.

That’s not to say someone won’t try it, though. Zak’s own work focuses on the role of the hormone oxytocin in trust and empathy. If drugs were developed to block oxytocin, the effect might be to reduce a soldier’s ability to empathise with enemy combatants or civilians.

“There are lots of stories of soldiers who refuse to shoot other soldiers,” says Zak. “If you could get rid of that empathy response you might create a soldier that’s more prepared to engage in battle and risk their life.”

Um… OK. The practical benefits are obvious enough, I suppose, and if you can justify war itself I dare say you’ll not struggle to justify chemically adjusting your soldiers to be less bothered about the risk of bleeding their life out on some sand dune somewhere.

But research into easy ways to suppress empathy has worrying implications beyond the military sphere. After all, haven’t we just seen first hand what happens when people with a low empathy quotient are given control of the financial instruments that span the globe? Sure, they’re efficient and ruthless – but that’s a double-edged sword, right there. [via Scumlord Warren Ellis; image by Soldiers Media Center]

To be honest, I’d blame our erratic sense of empathy for most of the problems the world suffers currently… and while I suppose that research into oxytocin levels would inevitably throw up ways to boost empathy, that’s never going to be as financially or militarily appealing as the opposite. And of course, one must remember that the street always finds its own use for things…

One thought on “Neuroscience soldiers”