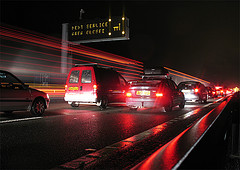 Have you ever wondered what causes those seemingly cause-less traffic jams the occur pretty much anywhere with a reasonable density of motor vehicles? Sure you have – but you probably didn’t have the mathematical chops to investigate further, unlike the geeks at MIT:

The mathematics of such traffic jams are strikingly similar to the equations that describe detonation waves produced by explosions, said Aslan Kasimov, a lecturer in MIT’s Department of Mathematics. Realizing this allowed the reseachers to solve traffic jam equations that were first theorized in the 1950s. The MIT researchers even came up with a name for this kind of gridlock – “jamiton.” It’s a riff on “soliton,” a term used in math and physics to desribe a self-sustaining wave that maintains its shape while moving.

The equations MIT came up with are similar to those used to describe fluid mechanics, and they model traffic jams as a self-sustaining wave.

“We wanted to describe this using a mathematical model similar to that of fluid flow,” Kasimov said.

The researchers hit upon the equation after an experiment by Japanese researchers demonstrated the formation of jamitrons on a circular road. In that experiment, drivers were instructed to travel 30 kilometers an hour (18.6 mph) while maintaining a constant distance between cars. It didn’t take long before disruptions occurred and phantom jams formed. Denser traffic brought quicker jams.

The MIT team found speed, traffic density and other factors can determine conditions that will lead to a jamiton and how quickly it will spread. Once the jam forms, the researchers say, drivers have no choice but to wait for it to clear. The new model could lead to roads designed with sufficient capacity to keep traffic density below the point at which a jamiton can form.

Now, after reading that article I found myself thinking “wouldn’t some sort of peer-to-peer traffic management system be better than building bigger roads?” So imagine how smug I felt when this article turned up a few days later:

The hope, of course, is that by understanding traffic jams we can learn to prevent them. Tom Vanderbilt, in his authoritative book Traffic, describes a simple experiment performed by the Washington Department of Transportation that involved a liter of rice, a plastic funnel, and a glass beaker. When the rice was poured into the beaker all at once, it took 40 seconds for the funnel to empty; the density of jostling grains impeded the flow. However, when the grains were poured in a gradual stream, it took only 27 seconds for the rice to pass through. What seemed slower actually turned out to be 30 percent faster. This helps explain why traffic engineers are so eager to install red lights on highway onramps: By slowing traffic before it enters the concrete funnel, they hope to prevent the road from exceeding its critical density.

I’d be willing to go out on a limb here and suggest that while vehicles are still driven manually by fallible and inherently selfish human beings, traffic jams are inevitable. The only way to truly control the side-effects of human behaviour are to take them out of the picture entirely – and while there are very few situations where I’d advocate such a thing, road traffic is one of them. [image by timsnell]

3 thoughts on “Jamitons – the math of phantom traffic jams”