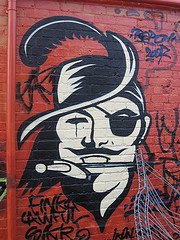 In amongst this week’s headlines of ludicrously disproportionate damages being awarded to the RIAA and assorted governments (including my own) clamouring loudly for the privilege of tucking themselves into the moth-eaten and holey pockets of Hollywood, we find a ray of pragmatic sanity: the CEO of computer games publisher Electronic Arts is openly asking software pirates to redistribute their titles. Why? Because they’ve worked out that it’s easier to make money selling stuff within the framework of a game than it is to sell a game itself.

EA thinks this is the secret to stopping—or at least curbing—piracy: games should be services, not products. Or at least products that should be selling other products. We already knew that EA would like to turn Tiger Woods into a subscription-based product, and Sims 3 is a game that wants you to constantly be creating, downloading, and buying new virtual items. The old business model was selling expansion packs, but that was too complicated: why not cut out the retailers and turn the game into its own store to sell the products?

“I’m a longtime believer that we’re moving to selling services that are disc-enabled as opposed to packages that have bolt-ons…. So the point I’m making is, yes I think that’s the answer [to piracy].” Riccitiello told IndustryGamers. “And here’s the trick: it’s not the answer because this foils a pirate, but it’s the answer because it makes the service so valuable that in comparison the packaged good is not. So you can only deliver these added services to a consumer you recognize and know… So I think the truth is we’ve out-serviced the pirate.”

It’s interesting to see a big games vendor like EA waking up to ideas that industry pundits have been suggesting for years, and I expect we’ll see some of the others abandon their King Canute impersonations when they realise that it works. Going forward, I expect that within a few years it’ll be virtually unheard of to “buy a game”; instead, we’ll subscribe to them, or spend time in them socially much the way we do with Facebook now.

That said, I suspect it’s too late for the major music labels to change course given the huge amount of money they’ve pissed away on trying to defend their old business models from change, but I struggle to sympathise; after decades of them screwing consumers and artists alike, I’m rather enjoying seeing the boot on the other foot. [image by Robyn Gallagher]

5 thoughts on “Electronic Arts invites the pirates to tea”