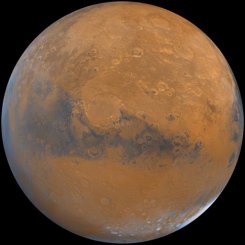 I know, it sounds pretty far fetched – but evidently all this stirring talk of great achievements has gotten someone hot under the collar, as Wired UK gives the (apparently exclusive) news that the UK government may change its policy on funding contributions to the ESA in favour of supporting manned missions, possibly someday sending a Brit along on a manned mission to Mars:

… Drayson said that the review would not result in a larger budget for space research in the UK, but could reverse the country’s refusal to fund manned missions. He said the European Space Agency’s (ESA) selection of a British astronaut, Tim Peake, for its astronaut training programme and the agency’s work towards a mission to Mars would help to capture the public imagination.

To date, the UK has only supported robotic explorations in space, and stipulated that the £180 million that it pays towards the work of ESA is not used for manned space programmes. As a result, the first Briton in space, Helen Sharman, travelled to the Mir space station on a Soviet rocket in 1991 as part of a privately funded mission. Other Britons who have also reached space did so by changing their nationality to become American or by going as space tourists with Russian space shuttles.

Drayson hopes to change this stance, but acknowledged that any UK manned mission would be the result of a collaboration with other nations. “Reaching Mars will be a huge scientific challenge but it won’t be done without a global effort,” he said.

The consultation will also look at whether the current UK space body, British National Space Centre (BNSC), should be replaced by a new British space agency. Drayson suggested that the new agency will be called Her Majesty’s Space Agency.

HMSA… sounds like something from an as-yet-unwritten Warren Ellis comic. Who knows what will actually come of it – the UK government will say anything that they think has a hope of raising a smile at the moment – but it’s quite gratifying to think that we might get involved more seriously with space exploration. Sadly I’m now way too old and unfit to even consider revitalising my childhood dream of being an astronaut… I doubt they’d need a blogger, anyway. *sigh* [image from Physorg]

But hey, I’ll bet Paul McAuley’s pretty stoked by the news; only yesterday, he was suggesting that a Mars mission should be reinstated as a long term goal for human space exploration:

Not because it’s easy; because it’s hard. Not because the Russians (or Chinese) might get there first. Cold War imperatives like that died when the Berlin Wall came down. No, we should send an international mission, for all humankind.

Impossibly ambitious? Foolishly optimistic? Maybe. A waste of money better spent on problems right here on Earth? These guys don’t think so. And hey, there are always going to be problems here on Earth, and most of the money will stay right here, employing an army of specialists and engineers, stimulating new technologies. There’s been a large amount of looking back, these past weeks, and regret for what might have been, if the Apollo programme hadn’t been abandoned. Let’s not make the same mistake again.

And, as pointed out at The Guardian, there’d be no shortage of volunteers for a manned Mars mission, even if it were made plain that it was a one-way ticket:

“You would find no shortage of volunteers,” said John Olson, Nasa’s director of exploration systems integration. “It’s really no different than the pioneering spirit of many in past history, who took the one-way trip across the ocean, or the trip out west across the United States with no intention of ever returning.”

Nasa is currently bound by Kennedy’s directive to bring its astronauts home, Olson said. But the other nations rapidly developing space programmes may shed the constraint, as could the commercial companies that may supplant national efforts. “Space is no longer for power and prestige; it’s truly for economic benefit,” the Apollo 11 flight director Eugene Kranz said. “The technology that emerges from high-risk, high-profile, extremely difficult missions is the technology that will keep the economic engine of our nation continuing to go through the years.”

With currently foreseeable technology, a round trip to Mars launched from a lunar outpost would take two to three years – a journey of six to nine months each way and a year-long mission on the surface.

If I was even close to meeting the selection criteria, I’d volunteer without a second thought.

But in the meantime, while we’re stuck here on Earth, how about a little mood music, eh? This video features a bootleg recording of Pink Floyd’s lost “lunar landing jam”, which they played out live as part of the BBC’s covergae of the Apollo landings [thanks to DailySwarm]. Get yer interplanetary blues on…