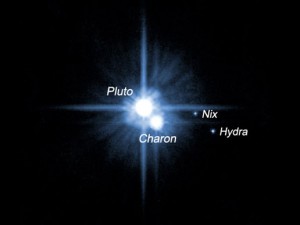 If you’re among the body of people who decried the demotion of poor little Pluto, take heart – it (he?) may end up reinstated some time soon:

If Pluto is reinstated, it will probably be thanks to discovery rather than debate. Mark Sykes of the Planetary Science Institute in Tucson, Arizona, believes that revelations within and beyond our solar system over the coming years will make the IAU’s controversial definition of a planet untenable. “We are in the midst of a conceptual revolution,” he says. “We are shaking off the last vestiges of the mythological view of planets as special objects in the sky – and the idea that there has to be a small number of them because they’re special.”

Sykes believes that missions currently en route to Pluto and the asteroid Ceres, which orbits the sun between Mars and Jupiter, will reveal these dwarf planets as active and intricate worlds. Meanwhile, astronomers may find distant objects as large as Earth which the IAU would not define as planets.

Sykes is among those who prefer a simple and inclusive definition of planet status: if an object is big enough for its own gravity to squeeze it into a rounded shape, then call it a planet. That would make a planet of Pluto again, as well as Ceres and a growing number of other bodies.

All this debate around nomenclature just goes to point out that we’ve a lot still to learn about our own backyard – and that the pace of discovery is picking up. I’m hoping the public interest in space doesn’t fade out after the Moon landing anniversary; even if we can’t go to these places ourselves, I think it’s important for us to think and learn about the universe beyond our gravity well. [image courtesy NASA]

One thought on “Pluto has a posse”