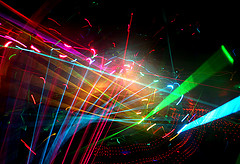 The space geeks among you will doubtless have heard of the laser propulsion concept before, but it’s largely remained ensconced in the realms of the theoretical so far.  However, the superbly-named Leik Myrabo reckons he has cracked it, and is currently working on bringing his ideas to a commercially viable status:

“Right now, we’re chasing the data,” Myrabo said. “When you fire into the engine, it’s a real wallop. It sounds like a shotgun going off inside the lab. It’s really loud.”

The laser propulsion experiments, Myrabo added, are also relevant to launching nanosatellites (weighing 1 to 10 kilograms) and microsatellites (10 to 100 kilograms) into low Earth orbit.

Now, colour me cynical if you will, but I reckon that last throwaway point there about the microsatellites may be the the more plausible goal for this technology, and the stuff about sending passenger vehicles into suborbital space is optimistic grandstanding designed to attract attention and investment. [image by Krassy Can Do It]

Even if the researchers (who are sponsored under international collaboration between the United States Air Force Office of Scientific Research and the Brazilian Air Force) are convinced of their omega point, cheap microsat launches will at least provide an income stream while development continues. Either way, it’s good to see another option on the table for commercial space launches.