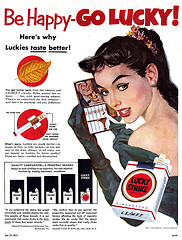 Many of my fellow citizens believe that the Apollo program was faked, evolution is a lie, global warming is a sinister plot by Al Gore to take away their Hummers, and President Obama is some kind of Nazi foreigner whose healthcare plan will lead to mass euthanasia. Disinformation seems to be a winning tactic.

So, yes, Discover Magazine’s interview with Robert Proctor, Stanford science historian and co-editor of Agnotology: The Making & Unmaking of Ignorance, had some resonance with me.

Just what is agnotology?
It’s the study of the politics of ignorance. I’m looking at how ignorance is actively created through things like military secrecy in science or through deliberate policies like the tobacco industry’s effort to manufacture doubt through their “doubt is our product” strategy [spelled out in a 1969 tobacco company memo [pdf]]. So it’s not that science inherently always grows. It can actually be destroyed in certain ways, or ignorance can actually be created.

Have you continued your focus on tobacco?
I recently collaborated on an exhibit of the most outrageous tobacco ads called “Not a Cough in a Carload.” It’s centered on medical-themed tobacco ads: that tobacco’s good for your T-zone, that it calms your nerves. Scientific tests prove that brand A is better than B, or, you know, 20,000 physicians recommend Camels, and so forth. The use of athletes and models, and the artwork is just beautiful.

How do you maintain the perspective essential to your kind of research?… [I]t’s important to see the past the way the people saw it. So I’ve written two books on Nazi medicine, and the goal there was not just to condemn them, but to see how in the world they came up with those ideas and those movements and how they justified them to themselves. So we see them as full humans and not just scarecrows, so we can actually understand the depth of the depravity or whatever. But at least we see it honestly, and that’s a traditional historical virtue.

2 thoughts on “Agnotology: The science of ignorance”