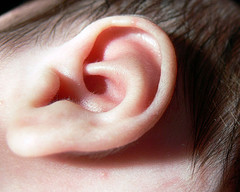 File under “elective implant technology that I don’t need but really wish I could afford anyway”: the bone-anchored next-generation hearing aid with audio jack input options.

Older-style hearing aids amplify all sounds, making it almost impossible for wearers to hear conversations in noisy environments. They also interfere with frequencies used by mobile and fixed phones and often emit high-pitched whistling sounds. But the newer processors, costing about $6000 each, shut out background noise, giving users up to 25 per cent better hearing, and can be attached directly to MP3 music players or wireless headsets for talking on the phone, Cochlear’s territory manager, Katrina Martin, said.

They were useful for people with congenitally blocked middle ears, chronic infections that had eaten away tiny bones in the middle ear used for sound conduction, or babies born with closed ear canals, she said.

The processors must be removed for showers or swimming but can last up to 15 years.

Once you’ve got that basic hardware installed, the sky’s the limit for crazy bolt-ons and extras. Real-time digital signal processing, on-board recording and playback… the first person to write an open-source filter for screening out people on public transport talking loudly into their phones is going to be very popular. [via BoingBoing; image by jessicafm]