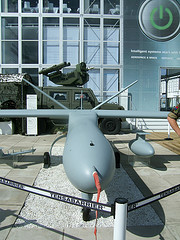 The United States Army has seen a lot of success with airborne surveillance systems in recent years, and it’s given them the taste for more. Wired’s Danger Room blog takes a look at the current state of the art as well as the latest ground surveillance specifications DARPA is bandying around to potential contractors:

In February we reported on Darpa’s Autonomous Real-time Ground Ubiquitous Surveillance – Imaging System (ARGUS-IS ), a 1.8 gigapixel flying eye which will be mounted in a 500-pound pod carried by a Predator or A160 Hummingbird robocopter. The ARGUS-IS makes for an impressive camera, with the resolution and processing power to track a large number of separate items including “dismounts” — people on foot — over a wide area, as well as “a real-time moving target indicator for vehicles throughout the entire field of view in real-time.”

But ARGUS-IS is already looking old. Now the Army is asking for something even more powerful. In a new request for solicitations, it outlined the concept for a novel visible/infrared sensor that will cover a much larger area on the ground — with much higher resolution.

The sensor is required to be lightweight with low power consumption and to have significantly lower operating costs compared to existing systems, and must be able to operate from small aircraft, either manned or unmanned. In terms of specifics, the Army is looking for 2.3 gigapixels running at two frames per second. By my reckoning, this suggests continuous coverage of area of around sixty-two square miles at 0.3m resolution with a single sensor. That’s quite a step up from Angel Fire, which covers a tenth of the area at much lower resolution.

That’s a lot of detail, for sure. And we can probably assume that the bulk of the aircraft carrying the hardware will in fact be unmanned; The Guardian reports that the US is now training more drone operators than bomber and fighter pilots combined.

Three years ago, the service was able to fly just 12 drones at a time; now it can fly more than 50. At a trade conference outside Washington last week, military contractors presented a future vision in which pilotless drones serve as fighters, bombers and transports, even automatic mini-drones which attack in swarms.

Five thousand robotic vehicles and drones are deployed in Iraq and Afghanistan. By 2015, the Pentagon’s $230bn (£140bn) arms procurement programme Future Combat Systems expects 15% of America’s armed forces to be robotic. A recent study ‘The Unmanned Aircraft System Flight Plan 2020-2047’ predicted a boom in drone funding to $55bn by 2020 with the greatest changes coming in the 2040s.

“The capability provided by the unmanned aircraft is game-changing,” said General Norton Schwartz, the air force chief of staff. “We can have eyes 24/7 on our adversaries.”

The article has a jaw-dropping closer, too:

In Wired for War, author Pete Singer speculates the machines are harbingers of a new era of “cost-free war”.

“It’s an historic change,” said Singer. “Going to war has meant the same thing for 5,000 years. Now going to war means sitting in front of a computer screen for 12 hours. Then you go home and talk to your kids about their homework.”

Yeah, cost-free war! Awesome! Well, it’s not cost-free for the brown people caught in the crossfire, but hey, it’s hard to care about them so much when they’re just pixels on a screen, AMIRITE? [main story via NextBigFuture; image by skuds]

6 thoughts on “Eyes in the sky: ubiquitous real-time aerial surveillance”