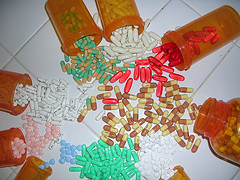 You’ve heard of the placebo effect, right? Well, apparently it’s becoming stronger, much to the chagrin of the pharmaceuticals industry who are finding that less drugs are passing clinical trials as a result:

MK-869 wasn’t the only highly anticipated medical breakthrough to be undone in recent years by the placebo effect. From 2001 to 2006, the percentage of new products cut from development after Phase II clinical trials, when drugs are first tested against placebo, rose by 20 percent. The failure rate in more extensive Phase III trials increased by 11 percent, mainly due to surprisingly poor showings against placebo. Despite historic levels of industry investment in R&D, the US Food and Drug Administration approved only 19 first-of-their-kind remedies in 2007—the fewest since 1983—and just 24 in 2008. Half of all drugs that fail in late-stage trials drop out of the pipeline due to their inability to beat sugar pills.

The upshot is fewer new medicines available to ailing patients and more financial woes for the beleaguered pharmaceutical industry. Last November, a new type of gene therapy for Parkinson’s disease, championed by the Michael J. Fox Foundation, was abruptly withdrawn from Phase II trials after unexpectedly tanking against placebo. A stem-cell startup called Osiris Therapeutics got a drubbing on Wall Street in March, when it suspended trials of its pill for Crohn’s disease, an intestinal ailment, citing an “unusually high” response to placebo. Two days later, Eli Lilly broke off testing of a much-touted new drug for schizophrenia when volunteers showed double the expected level of placebo response.

It’s not only trials of new drugs that are crossing the futility boundary. Some products that have been on the market for decades, like Prozac, are faltering in more recent follow-up tests. In many cases, these are the compounds that, in the late ’90s, made Big Pharma more profitable than Big Oil. But if these same drugs were vetted now, the FDA might not approve some of them. Two comprehensive analyses of antidepressant trials have uncovered a dramatic increase in placebo response since the 1980s. One estimated that the so-called effect size (a measure of statistical significance) in placebo groups had nearly doubled over that time.

You’ll not find me shedding many tears for Big Pharma, frankly; as pointed out in the rest of the article, their profit margins of the last few decades has been based on turning psychiatric treatments into mental cosmetics, and the increase in the placebo response may well be tied to their incredibly effective marketing procedures – by associating drug consumption with positive images of well-being, they’ve stimulated our response to all pills, regardless of their chemical make-up. Research is increasingly suggesting that one of the biggest prerequisites for getting better is simply a reasonable expectation that one actually will. [via BoingBoing]

I’ve got something of a personal stake in this, having seen far too many friends diagnosed with one form or another of psychiatric condition and promptly put on a regime of drugs that have shattered their personalities – and lives – permanently. I’m not denying the existence of mental illness, but I’m quite convinced that overdiagnosis is rife, with many drug-treatable “syndromes” being little more than completely natural phases of mental development or reasonable responses to environmental conditions which would respond far better to counselling and emotional support. Hence I was intrigued to read an article by medical anthropologist Eugenia Tsao [via @somatosphere], who recommends that members of her profession and others should start pushing back against the relentless attempts to pathologize (and hence monetize) our reactions to our social environment:

What is revealed about a society, in which drugs are touted with increasing regularity as a treatment of choice for entirely natural responses to conditions of unnatural stress? How have we been persuaded to equate such things as recalcitrant despair (“Dysthymic Disorder,” DSM-IV-TR 300.4), adolescent rebellion (“Oppositional Defiant Disorder,” DSM-IV-TR 313.81) and social apathy (“Schizoid Personality Disorder,” DSM-IV-TR 301.20) with aberrant brain chemistry and innate genetic susceptibilities rather than with the societal circumstances in which they arise? What does it mean when increasing numbers of people feel as though they have no choice but to self-medicate with dubious chemical substances in order to stay in school, stay motivated, stay employed, and stay financially solvent?

Anyone here remember an obscure industrial band called Consolidated? They had a lyric on their Business of Punishment album that went something like “they must remain sick / so we can continue to treat them”. [image by neur0nz]