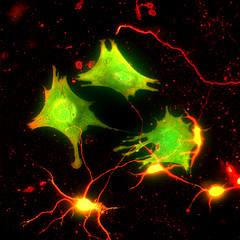 OK, so it won’t be a whole human brain… but two researchers at the University of Warwick Reading are preparing to upgrade their rat-neuron robot to use human brain cells instead:

To make the system a better model of human disease, a culture of human neurons will be connected to the robot once the current work with rat cells is completed. This will be the first instance of human cells being used to control a robot.

One aim is to investigate any differences in the behaviour of robots controlled by rat and human neurons. “We’ll be trying to find out if the learning aspects and memory appear to be similar,” says Warwick.

And in case you were wondering about the potential ethical minefield involved with doing research on human tissue cultures… well, apparently it’s just not an issue in this case:

Warwick and colleagues can proceed as soon as they are ready, as they won’t need specific ethical approval to use a human neuron cell line. That’s because the cultures are available to buy and “the ethical side of sourcing is done by the company from whom they are purchased”, Whalley says.

4 thoughts on “First bot with a human brain?”