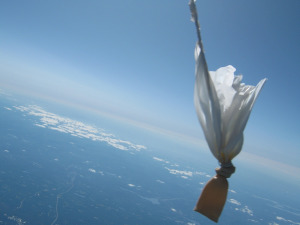 If the $8000 TubeSat kits we mentioned last month are still to pricey for your pocketbook, never fear – you can still muck about on the edge of space, provided you can scrape up a few hundred bucks. A group of MIT students under the aegis of the Icarus Project have managed to take digital photographs from 17.5 miles above the surface of the Earth using nothing but off-the-shelf components… for a mere $150. [via Hack A Day]

The GPS receiver was a Motorola i290 “Boost Mobile” prepaid phone with internet and GPS capability (set up with Accutracking to constantly report its GPS location).

We bought a AA-battery cell phone charger to sustain the phone’s power over the duration of the flight, and we used Energizer lithium batteries (rated to operate at temperatures are low as -40F) to power both this charger as well as our camera.

As a further safeguard against electronic/battery failure due to low temperature, we utilitzed Coleman disposable hand warmers (placed near our electronics) to help keep our equipment warm in the cold of the stratosphere.

We loaded a Canon A470 camera (bought used on Amazon) with CHDK open source software to enable a feature which allowed the camera to take pictures continuously (intervalometer). Using this feature, we set the camera to take a picture every 5 seconds at a 1/800 second shutter speed. With an 8GB card, the camera was able to chronicle the whole journey of the balloon from launch to retrieval. (~5 hours)

OK, so it’s not exactly the most complex payload ever sent aloft, but it’s a clear demonstration that ingenuity gets things done… as is the example of Armadillo Aerospace, who’ve just taken the Level 2 prize of $1million for the Northrop Grumman Lunar Lander Challenge with their Scorpius vehicle.

And given that NASA has been warned that it needs to constrain its goals unless it can increase its budget, that’s good to know; I’m more convinced than ever that the next big steps in space will not be achieved by government agencies, though they may retain a political space on the game-board by commissioning more prize challenges.