So, did you enjoy Lavie Tidhar’s story “Spider’s Moon” which we published yesterday?

It’s been a busy year for the globe-trotting Mr Tidhar, whose last email to me came from a small internet cafe in Bangkok; not only has he been writing his own material (of which a lot is scheduled for publication in the near future) and running his own blog, he’s been curating the World SF News blog as well – shining a light on fresh non-Western science fiction from around the world, and earning himself a nomination for the inaugural Last Drink Bird Head award for his activism. 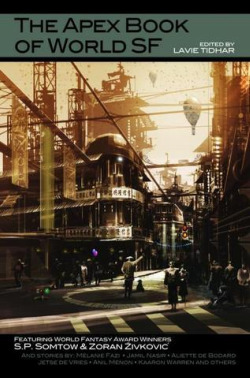 “Spider’s Moon” isn’t his only publication credit for this month, either. Lavie edited and assembled the Apex Book Of World SF anthology for Apex Books, which was released at the weekend and is now available through Amazon (and, I fully expect, other major internet bookstores)… though I’d recommend you buy direct from Apex themselves, because you’ll get a better price and swifter dispatch (not to mention making the staff of a quality small publishing house very happy indeed). Here’s the table of contents:

Some familiar names, and some new ones too – so if you fancy sampling some science fiction that wasn’t written in your own backyard, why not get a copy for yourself? US$18.95 seems a pretty decent price for a sixteen story anthology, and you’ll not only be supporting the genre publishing industry at the roots but exposing yourself to some exciting new voices and ideas at the same time. So what are you waiting for? Go buy one.