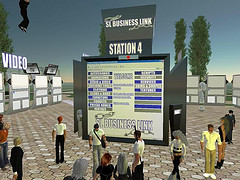 Here’s an interesting development in the metaverse – Linden Lab, creators of Second Life, have announced the formal launch of their “Second Life Enterprise” platform, which is essentially a fragmented piece of the virtual world that runs on corporate servers behind the firewall. Private, hermetically-sealed virtual worlds, in other words. [image by Daneel Ariantho]

This is important for two reasons. First of all, it’s a major step in Linden Lab’s attempts to turn a decent profit from Second Life, which it has struggled to achieve with the free-to-use business model of the public version. If they can convince some big players of Second Life’s utility as a collaborative business tool, the subsequent inflow of money might enable them to step up the bug-hunt and fix some of the virtual world’s bigger flaws. IBM have been a presence in SL for some time, as have other big corporations (to whom we can now add the US Army’s Medical Research and Materiel Command branch, who are financing a “therapeutic space” for amputee veterans using SL Enterprise); the potential for the same tools in a more secure environment (e.g. devoid of flying penis barrages, for a start) may entice more money into Linden Lab’s coffers, and open up the field for competition from other virtual worlds. So now’s the time to set up a business making sharp business suits for executive avatars, I guess…

Secondly, the veil of privacy will doubtless encourage experimentation, and should lead to some new and weird ways of interacting with (and creating within) synthetic spaces. After all, you wouldn’t want to go developing your top-secret big-money idea in public where anyone could see (and copy) it, would you? Imagine for a moment that DARPA decided to set themselves up with an SL Enterprise installation… I’d pay a good big bribe to check out the crazy crap they’d have filled it with after a year or so of getting to grips with the interface, that’s for certain.

And, of course, one can’t help but be reminded of the abandoned corporate virtualities featured in William Gibson’s Bridge Trilogy, most particularly Idoru. Like the adandonware websites that already festoon the web, sat on some server somewhere, waiting for a rental agreement between two companies that no longer exist to expire, the metaverse could soon become a multimetaverse, with a few vast virtualities with public access and countless little bubbles of digital existence locked away behind firewalls and restrictive protocols. Urban exploration is a growing trend at the moment, but in a decade or so, the adventurous people will be cracking their way into abandoned corporate and gubernatorial realities to see what they can find lying around… and hell knows some of it will be more interesting than rusty old swivel chairs.