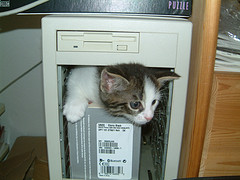 You can’t so much as turn sideways without stumbling over this story, especially in the transhumanist and Singularitarian neighbourhoods of the web, and with good reason. So let’s just cut straight to the meat of it:

Scientists, at IBM Research – Almaden, in collaboration with colleagues from Lawrence Berkeley National Lab, have performed the first near real-time cortical simulation of the brain that exceeds the scale of a cat cortex and contains 1 billion spiking neurons and 10 trillion individual learning synapses. [via KurzweilAI]

(And I’ll tell you, much as I love the web and the young crazy companies that throng through it, no one writes a press release like the guys from IBM.)

Additionally, in collaboration with researchers from Stanford University, IBM scientists have developed an algorithm that exploits the Blue Gene® supercomputing architecture in order to noninvasively measure and map the connections between all cortical and sub-cortical locations within the human brain using magnetic resonance diffusion weighted imaging. Mapping the wiring diagram of the brain is crucial to untangling its vast communication network and understanding how it represents and processes information.

These advancements will provide a unique workbench for exploring the computational dynamics of the brain, and stand to move the team closer to its goal of building a compact, low-power synaptronic chip using nanotechnology and advances in phase change memory and magnetic tunnel junctions. The team’s work stands to break the mold of conventional von Neumann computing, in order to meet the system requirements of the instrumented and interconnected world of tomorrow.

All the pomp and majesty of the best publicity material, but still somehow stately, dignified. You’ll have to forgive me, but I see a whole lot of press releases on a daily basis, and when I see one this well crafted, I just have to sit back and admire it (or envy it) for a moment.

But delivery systems aside, what’s the story here? Basically, IBM have built a computer that simulates the complexity and interconnection of a cat’s brain, which is significantly more complex than previous neuro-cortical simulations. Why does that matter? Well, because for those who theorise that the human mind is an entirely emergent property of the brain (that there’s no such thing as a soul or spirit, in other words) the ability to simulate the hardware that the mind runs on should provide us the ability to simulate the mind itself. And once we can simulate it, we can probably record, transfer, tweak and tamper with it. Think human-level artificial intelligence; think Technological Singularity predicated on a point where intelligent machine become intelligent enough to redesign themselves. Think brain uploading, Moravec cyborg bodies, a panoply of simulated virtual universes… think hard and crazy science fictional stuff, in other words.

Of course, there’s no certainty that any of these things will result from IBM’s simulated cat brain, but it’s another proof-of-concept step along that road. Now all they have to do is keep the BlueGene computer from chasing dust motes in sunbeams and taking a nap every time they want to run some tests. [image by avatar-1]