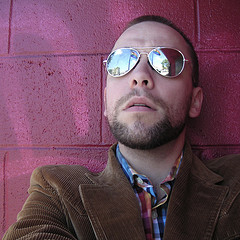 Years ago, I had an idea for a futuristic pair of goggles that visually transformed homeless people into lovable animated cartoon characters. Instead of being confronted by the conscience-pricking sight of an abandoned heroin addict shivering themselves to sleep in a shop doorway, the rich city-dweller wearing the goggles would see Daffy Duck snoozing dreamily in a hammock. London would be transformed into something out of Who Framed Roger Rabbit.

What’s more, the goggles could be adapted to suit whichever level of poverty you wanted to ignore: by simply twisting a dial, you could replace not just the homeless but anyone who receives benefits, or wears cheap clothes, or has a regional accent, or watches ITV, and so on, right up the scale until it had obliterated all but the most grandiose royals.

At the time this seemed like a sick, far-off fantasy. By 2013, it’ll be just another customisable application you can download to your iBlinkers for 49p, alongside one that turns your friends into supermodels and your enemies into dormice.

Beneath the snark, Brooker is pointing out that we already have a tendency to filter reality so that we only see the bits we want to – confirmation bias at work, in other words. Once the hardware is cheap and powerful enough to achieve iPhone-ish levels of market penetration, software that works in the way he’s describing above is not just possible but plausible. And as nice as it is to think that you’d not be tempted yourself, I suspect we all would be to some degree… try inverting the class dynamic of Brooker’s prediction, for instance. [image by gwdexter]

So, reality filters are inevitable… but experience dictates that where commerce, culture and technology meet up, things rarely remain in stasis. Enter new Futurismic columnist Tim Maly, who opines that the perpetually escalating arms race between spammers and filter-builders may be the one thing that fends off the hyper-Balkanised culture that so terrifies commentators like Brooker:

The trajectory assumed is of increasingly powerful and impregnable filters. If that trajectory holds, then one expects an increasingly balkanized culture, full of isolated groups that think they have nothing in common. But there’s a second set of actors in play, the ones being filtered out.

As the first group works harder to filter out unwanted messages, the second works harder to break through. We see it in the arms race around advertising. We see it in politicians struggling to find new ways of reaching their audience. We see it in Google’s need to constantly change and update their pagerank algorithms as black hat SEOs learn to game the system.

So long as the arms race continues, the filters will get better without becoming perfect. And in those cracks, reality (or at least an alternate viewpoint) can intrude. Insofar as we believe that people can’t know in advance what is best for them or what information they should receive, we should celebrate inefficiencies in filters.

In every successfully delivered spam message, there is a ray of hope.

Spam as a ray of hope… who knew? There’ll be more from Tim in his first proper column tomorrow, by the way. 🙂