This being the multi-media future and all, I would like to begin this column by asking you to consider a video taken from Charlie Brooker’s BBC 4 TV series Screenwipe :

Now, I consider this to be one of the most enjoyable rants I have ever seen on television. Aside from a few minor quibbles (“kick to the nuts spiritually speaking”? Redundant “low self-esteem engine”? Pointless pun, far too on-the-nose) I think it is exquisitely written and paced. It takes us from a sedate and happy place and slowly builds into a frenzy of anger and frustration before collapsing into an abyss of sorrow, alienation and resignation – a rise and fall exquisitely supported by Clint Mansell’s score from Darren Aaronofsky’s Requiem for a Dream (2000). It is everything that a rant should be. But is it right? Does the media really ask us to identify with an endless procession of impossibly glamorous and accomplished caricatures? In some cases, yes.

My column from last year about Images of Heroic Slavery saw in action-oriented video game characters a pronounced tendency towards the embodiment of certain culturally prized values. The protagonists of games like God of War, Gears of War and Prototype all possess super-human powers that they use in order to break free of an oppressive and unjust system. These characters present us with pure fantasies of agency. Fantasies that pander to our modern condition as down-trodden, brutalised and disenchanted consumer slaves. Even when video games are not asking us to identify with muscle-bound crypto-fascists, they are asking us to identify with loathsome hipsters as in games like Mirror’s Edge (my thoughts on which can be found here). Nowhere is this approach to engendering gamer identification more obvious than in sports games, which scramble over each other in order to secure the right to plaster the faces of Tiger Woods, Wayne Rooney and Luol Deng all over their products.

However, as I discovered when I wrote a column about MMORPGs, the true face of video game escapism is more complex and nuanced. It is not simply a question of aspiring to levels of beauty and power that we will never acquire. Instead, MMORPGs reveal a gaming population very much at home with quite mundane fantasies — fantasies not of agency, beauty and power, but of mere competence: the kind of competence that comes from doing your job and getting a fair day’s pay for a fair day’s work. Nowhere is this tendency more beautifully articulated than in the continued success of Sports Interactive’s Football Manager series.

Playing Football Manager 2010 — the latest iteration in the series — is about as far as you can get from the pixel-drenched button-mashing of games like Bayonetta (2009). The experience of playing the game is less likely to induce epileptic seizures or RSI-related injuries than it is to wear out the material of your jeans as you slouch in your office chair and pour over the latest set of spreadsheets to be generated by your army of digital helpers. Football Manager 2010 is a game that is about running a football club. From choosing the right centre forward to picking the right formation, from selecting the person to take free-kicks on the left-side of goal through to choosing staff members, managing contracts and setting up personalised training regimens for your players: this is a game that is almost preposterously data-rich.

It is also a game that rewards the continual analysis and re-analysis of that data, as tiny tactical tweaks and increased effort in scouting for players almost always results in improvements in your team’s performance. Indeed, Football Manager is a game all about small triumphs, like tracking down a supremely talented Chinese teenager before anyone else and then locking him into an exploitative contract for the best years of his life, or managing to squeeze yet another year out of your fading 40 year-old playmaker by finding a fitness regime that will keep him active enough to run throughout an entire game without causing him to fall over and break a hip in training. The plethora of tiny pleasures that make up the Football Manager experience is what is ultimately responsible for the game’s most surprising characteristic: its addictiveness.

Management sims like Football Manager ultimately have their roots in genres such as the God Game (such as Black & White, Populous and Spore) and games at the more abstract end of the strategy spectrum (such as Civilization and Rome: Total War). But whereas most of these games involve sessions that last maybe up to five or ten hours, your average Football Manager campaign can span twenty years of game time with each year taking maybe fifteen or twenty hours to play through. Football Manager would be a life-eater, were it not for the fact that you can have it open as a window on your desktop allowing you to play it for a few minutes while waiting for a download or simply wasting time online. Football Manager’s main competition for your attention is not another game, but Stumble-Upon or YouTube.

However, what is absolutely fascinating about the success of the Football Manager series is the astonishing mundanity of its skill-set. It is not a game in which you do well by killing loads of people, uncovering vast conspiracies or stealing enemy secrets. It is a game that rewards knowing how to balance the books of a business, knowing when to make capital investments, knowing who to hire, knowing when to listen to the people you hire and having faith in the product that you put out. In a way that is even more pronounced than in the realities of playing games like City of Heroes and World of Warcraft, Football Manager is a game about being good at your job and nothing more. It offers us a fantasy of professional competence.

Indeed, where I think Charlie Brooker gets it wrong is in his failure to recognise quite how much of our leisure activities do focus around aspiration, and how media that helps us aspire to superhuman power and beauty is utterly overshadowed by media that provides us with fantasies of simple professional and personal competence.

Consider, for example, TV programmes such as Ramsay’s Kitchen Nightmares, Pop Idol or MasterChef. These are all programmes that make talent appear accessible to all. Every week, Gordon Ramsay goes into another restaurant and tells people that they need to cook the food they serve, and preferably serve local food simply cooked. Watch a couple of episodes of the series and you will feel that you know how to run a restaurant. The same applies to knock-out competitions like MasterChef and Pop Idol. By starting from a pool of contestants barely more talented than a random sampling of the general population, these series suggest that anyone can be a talented person: you just need to be a bit better than the next guy. Some of Cowell’s other shows even reveals this message in the title : America’s Got Talent, and apparently Britain’s Got Talent too.

Lifestyle TV is built around this message. The message is not designed to draw attention to our failings, but rather to make us think that we are more competent than we are. People watch TV cookery programmes but never make the actual dishes… and if they did, they would probably fuck them up anyway. But the TV chefs are selling you a dream of competence: they make it all look so easy…

This type of TV collides beautifully with games such as The Sims. Much like MMORPGs and Football Manager, The Sims is a game that is more than capable of taking over huge slices of your life. In order to succeed at The Sims you simply need to balance the demands of work with a social life, a home life and a need for self-improvement. And like the TV chefs and make-over gurus, the game makes it all seem so easy… sure, you will have the odd moment where you’re too busy working to see your friends and you may even occasionally wet yourself but you will get there… you’ll get that great job. You’ll get that great house. You’ll do it. The Sims is a game that sells you the dream that you might not actually be a complete fuck-up.

The psychological mechanics behind this process can be explained by considering the work of the lesser-known psychoanalytical theorist Heinz Kohut. Kohut focussed upon the ways in which we develop a sense of self. He argued that we make our way through life not only with a firm idea of what kind of person we should be, but also a decent idea of the ways in which we are failing to live up to those standards. One of the ways in which we cope with these shortfalls in ourselves is to compensate. We may not be able to change how we feel or who we wish we were but we can make purchasing, professional and relationship decisions. These acts of compensation create what Kohut called SelfObjects.

I would argue that, as puzzling as it is, the tendency for gamers to enjoy games that allow them to aspire to reasonable rather than fantastical goals and identities is a result of a generalised desire to create SelfObjects. We all feel bad about ourselves sometimes. We all make bad decisions. If we play games that allow us to replay and rehearse these kinds of decisions in a much safer environment, then we can prevent the appearance of those feelings of inadequacy. We too can be ‘normal’. We too can be ‘happy’. 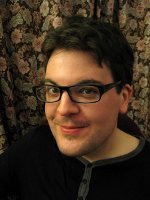 Jonathan McCalmont is a recovering academic with a background in philosophy and political science. He lives in London, UK where he teaches and writes about books and films for a number of different venues. Like Howard Beale in Network, he is as mad as hell and he’s not going to take this any more.

Jonathan recently launched Fruitless Recursion – “an online journal devoted to discussing works of criticism and non-fiction relating to the SF, Fantasy and Horror genres.” If you liked the column above, you’ll love it.

[ The fractal in the Blasphemous Geometries header image is a public domain image lifted from Zyzstar. ]

One thought on “Fantasies of mere competence: Football Manager 2010”