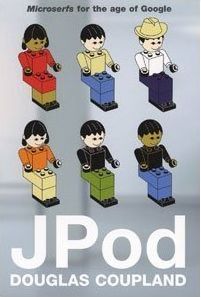 My initial response on finishing Coupland’s 2006 novel JPod was less than valedictory, but it deserves qualification: I was relieved to have finished it and glad it hadn’t eaten a large amount of my time, but I’d felt no urge to stop reading it. The fairest and truest thing to say would be that it’s not my sort of novel. Whether this is due to a sort of cultural immune-system reaction to the modern “novel of character” by a mind more accustomed to the biome of science fiction (and its defiantly non-literary concern with plot and story) is an open question.

Perhaps “novel of caricature” would be more accurate in this case; JPod is a satire, saturated with po-mo riffing and intertextual databursts of deliberately gnomic web-ephemera, chunks of code and rogue ad copy. It is also – as acknowledged by Coupland and his characters within the text – powered by ironic distancing, both at the microcosmic level of the characters and at the macroscopic level of the book as a whole. It’s an exercise in too-cool-to-aspire-to-being-cool detachment, like the lives of its inhabitants. The eponymous JPod is, both physically and socially, one of those brackish pools of human stasis that emerge from the chaotic churn of any large modern corporation, a six-person cube farm that’s more home than home to its hypergeek inmates. They’re working on a skateboarding game which, over the course of the book, will drift relentlessly toward the depths of development hell (via charismatic sidekicks in the form of a turtle named Jeff) to eventually founder on the reefs of cloying fantasy cheddar-quest cliché, and then be torpedoed by middle management and marketing. To Ethan and his fellow Jpodders, this makes their allegedly shitty jobs progressively yet more shitty – to which the only logical response is to spend more time in the office than ever before.

Yeah, really – they practically live there already. But not because of their real workload; it’s because they spend the vast majority of the day Googling trivia and trawling webshops, writing surreal love-letters to Ronald McDonald (SRSLY), and printing out 100,000 digits of pi with one digit wrong before racing to detect the dud (first to find it wins… a packet of chips!) The worse the game becomes, the more energy they put into designing a gory “Easter egg” subgame into the project; tellingly, that’s far more energy than they expend on the game proper, on the jobs they’re supposed to be doing. Other than this, not much happens.

Actually, that’s not really fair, stuff does happen: Ethan’s parents blunder through cartoonish lives of naive stupidity, desperately chasing after something – anything – to anchor the centre of their lives to; Ethan’s project manager acquires a heroin habit (courtesy a brief sojourn in a Nike shoe sweatshop in China) which makes him a much hipper, cooler down-with-the-dissonance kinda guy; and Ethan himself gets mixed up in murder, manslaughter, drug distribution and people-trafficking. Life washes over them all like they were rounded stones, tumbling in tides beyond their ken; the only character with any real agency is Coupland himself, woven into the latter half of his own narrative as avatar and authorial voice at once.

JPod is cruel, sad and a product of its era. Published in 2006, it was presumably written during (and largely about) the upswing of the last tech bubble, back when massive games companies could still afford Googleplex-style employee perks for whole departments of dead weight, and when those dead-weight employees could afford to buy new limited edition brand-name sneakers every Wednesday just to give the week a bit of shape. The JPodders are feckless Millennials, their parents are Boomer burn-outs — all wrecks on the hard shoulder of the ideological freeway, symbols of failed solutions to the question of consumer capitalism. They are grotesques, inflated and distended for satirical effect, overamplified into the crunch zone… because subtlety is a dead scene, man, especially when irony is in the driving seat.

And so we get Chinese businessman character who is – of course! – a criminal kingpin with shark-like charm and natural charisma… but who is (again, interestingly) the only character who seems to have even considered what his own moral code or philosophy of life might be. (He’s also one of the few characters who ever really acts.) JPodder John Doe changed his name to a statistical in-joke as a result of his radicalised upbringing: his mother is every tired cliché of the seventies-vintage militant bra-burning bull-dyke lesbian bundled into one figure of easily-othered contempt. And the JPodders themselves? They’re interchangable, mutable, a mosaic, their collection of “microautistic” behaviours combining – sort of like Megatron, y’know? – into the complete and manifold UrGeek.

I’ll say it again: JPod is cruel. I’ll add that I’m well aware that this is the entire point of the book, but it still feels to me a purposeless cruelty, where a cynical look at a cynical world becomes so cynical that the cynicism forms some sort of infinite closed loop of loathing and contempt that pushes away anything more nuanced. There’s a plot (sort of), but there’s no story; there’s character, but no character development (unless you count the seemingly random and unsuccessful leaps of ideological and psychological faith). The ending is ironically happy: happy because the JPodders wind up in a nice new job coding for Coupland, ironic because they’re the same hopeless directionless losers they were at the start, just a year earlier. They haven’t learned anything. Hell, they haven’t even learned that they haven’t learned anything.

And yet again: I get it. I get that this is the point Coupland is trying to make. (Hence the final page of the novel mimicking the prompt at the end of a vanquished computer game: “Play again? Y/N” The score is reset once you fulfil the current victory condition; the best the JPodders can hope to do is thrash mechanically through the game yet again… or perhaps try a different one, or use a cheat code. Whatever.)

Coupland is trying to highlight the broken lives of my generation (or at least a very select and comparatively privileged subsection thereof), but the  sympathy (if there was any to start with) has all been boiled off, and as such his self-insertion becomes an exercise in self-justification: “Hey, look – I’m being cruel and exploitative and edgy! But it’s OK, because I’m doing it ironically, and furthermore I’m not sparing myself from the tarbrush!” The end result, for this reader at least, was a handful of slightly queasy giggles, a few funny riffs and scenes punctuating a deeply depressing novel.

When Justin Pickard responded to my disparaging tweet, he mentioned that he much preferred the CBS television adaptation of JPod to the book. I’ve not seen it (I didn’t even know there was one), but I can well imagine how well it might work on the small screen: JPod is centred on the shallow irony that I notice in sit-com series, and I’m no great fan of either. Evidently, however, a lot of people do appreciate the dark funhouse mirrors of these types of media (another of Coupland’s underlying points, perhaps – it’s cruel, and we know it, but we still buy it, and look what it turns us into!), and that’s what makes JPod an important novel, if not a very likeable one.

Coupland’s own ironic distance from himself (and from his public authorial persona) doesn’t help; not content with devaluing the world and his characters, he has to devalue himself and his work, too. It’s reviewer hyperbole to talk about wasted pages in a novel, but in JPod you can make a case for them quite literally: the aforementioned chunks of dataflotsam serve little purpose that I can discern beyond (dis)orienting the reader between scenes, and the reproduction of the entire script of the aforementioned number games (literally dozens of pages of numerical digits, one after the other, no spaces, no linebreaks) underlines the point: “I’m even cynical about the novel-as-form, about the novel-as-story! Yet here I am writing a cynical novel about people being cynical about everything and how that devalues everything around them,” Coupland seems to say, so utterly po-mo that he’s even hostile to his own metanarrative of hostility toward metanarratives. (Which does for processing irony what dividing by zero does for your calculator, I guess.)

Another friend mentioned that he quite liked the book, but that “it basically defines self-indulgence”; I can’t really think of a better capstone description. Is self-indulgence permitted when it’s in the service of satirising our own self-indulgence? Well, of course it’s permitted… but to me it still reads like 550 pages of masturbatory self-loathing; your mileage, as the saying goes, may vary. As a commentary on the world that birthed it, JPod is an ugly triumph; perhaps my distaste for it is the clearest mark possible of Coupland’s success.