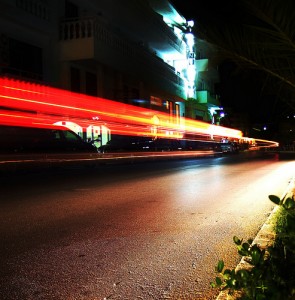 How fast can you write well? Don’t mistake slowness for quality: what speedy writing lacks in deliberation, under the right circumstances and with enough writing practice behind it, it can more than make up for in involvement, awareness, and momentum. [image by Neal Fowler]

James Maxey, author of numerous successful short stories and of the Dragon Age trilogy of novels, has been used to a goal of 10,000 words written per week. This is pretty ambitious by almost anyone’s standards, and he doesn’t always hit the mark. Recently, though, he found he suddenly and unexpectedly had a full week without obligations, and he asked himself if for that time he might be capable of writing 10,000 words a day. Working like that for a week, he reasoned, it should be possible to write an entire novel.

Maxey planned a roughly 60,000-word sequel to his superhero novel Nobody Gets the Girl (Phobos Books, 2003; available in paperback and for Kindle), wrote an outline based on ideas he’d been having for years, and psyched himself up. At about 4:00 am on August 8th, he started writing. Stopping for little more than food and sleep, he pushed hard and completed the book in a 58,829-word first draft on August 14th at about quarter to three in the afternoon, with more than 13 hours to spare. His novel, appropriately enough, is called Burn Baby Burn.

He not only completed and survived the project, he kindly agreed to let me interview him about it a few days later.

Welcome to Brain Hacks, James! Let me jump in with an obvious question: what in the world made you think you could write a novel in a week?

I knew that crime and adventure novelists from the pulp era often cranked out multiple short novels per month. Michael Moorcock claims to have written some of his Elric novels in a week, and I’d heard that Jim Thompson wrote The Grifters in a weekend (though I tried to Google that factoid this morning and couldn’t find it, so I may have been working under a false premise!).

Like most writers, I have a day job. I’ve pretty much been continuously employed since I left college. The vast majority of my writing takes place in stolen moments. When I’m in the zone, I can produce roughly 1000 words in an hour. But, it’s so hard to get in the zone. After I get home from work, I’m too burned out to sit down and write immediately. After I start feeling like myself again and get to work in an evening, right about the time I’m feeling warmed up, it’s bed-time, since I have to get up at 5:30 in the morning to punch the clock again.

And I’ve always wondered: What if I was punching the clock to write? Could I put my butt in a chair and leave it there for eight hours a day? Every now in then on a day off, I managed to do this. My record for a single day was 13,000 words. But, it’s rare I have a day off when I have a free eight hours. On weekends, I like to go biking and canoeing with my fiancée. My vacations are normally spent with family at the beach. I don’t want to be a recluse and cut myself off from all human contact. So, most weeks, I only get about 10 hours of writing time.

Then, in a surprising plot twist, my employer announced they were shutting down my workplace for a week to rewire the building for new equipment. I had only a month’s notice. Suddenly, I found myself with a week of time where I’d be home all day while my fiancée and all my friends would be at work. I had no plans to travel, no obligations at all. After fantasizing for the last twenty years about how much writing I could do if I wasn’t employed, it was suddenly time to discover if I had what it takes to write a book in one week, or if I’d been kidding myself all along.

I know this is already a long answer, but there are two more elements that play into this: 1. I discovered this year that I had a severe thyroid deficiency. One way I discovered this was that the records I keep of how many words I produce a week showed a declining trend. I’ve now been taking medication for several months to compensate, and just in the last few months have felt my brain wind back up to full speed. I wrote the bulk of my last novel, Hush, when my thyroid deficiency was at its worst, I felt like I’d been running a marathon wearing lead boots. Now, the boots were off, and I felt faster than ever. 2. The novel I had in mind was a novel I’d wanted to write for years, but hadn’t because I didn’t think I could sell it. But, the publishing world has been upended by e-books, and now I can write whatever I want to write secure in the knowledge that I can bring it to readers via Kindle and Nook. Knowing that what I’m writing is definitely going to see print (or pixels, at least) is a tremendous motivator.

What obstacle threatened to hold you back the most, and how did you get past it?

I would say that my biggest obstacle was that I can type a heck of a lot faster than I can imagine story details. So, after a big rush of words on the first day, each subsequent day got a little tougher as my imagination buffer kept running dry. By Wednesday, I really wondered if I should pull the plug on the project. I wrote a very clunky chapter that was also pretty short, but which still took hours to produce. I worried I’d reached a point of diminishing returns, and continuing might actually ruin the book if I kept cranking out bad chapters.

Fortunately, I was posting chapters to my blog at dragonprophet.blogspot.com as I wrote them. I’d announced I was going to finish a novel in a week there, and on Facebook, and on Codex. Failing to keep posting chapters would have been a pretty public failure. So, mostly to avoid embarrassment, I kept writing on Thursday morning. And, yay! I liked the chapter I wrote. I didn’t spend as much time at the keyboard Thursday – Sunday as I did Monday – Wednesday, when I was pretty much glued to the computer. I would walk away and think about what happened next, then what happened next, and not come back until I had three events to flesh out. Three events didn’t require a huge effort to think up, and proved sufficient to let me keep typing without feeling like my brain was running dry.

I do think that, if I hadn’t been so public with my goal, the temptation to quit after I’d gotten 30k words written for the week would have been difficult to overcome. I’d never written that much in a week before. It would have been very easy to call it a win and finish the rest of the book before the end of the month at my old 10k words a week pace.

How do you feel the book came out compared to books you’ve written at a more usual speed?

The plot was definitely more stream-lined. It’s still a fully developed main plot, but it only has two or three sub-plots. Through the book, there are only three point-of-view characters. Sunday and Pit’s POVs drive the main story, while the superhero known as Ap has a few POV chapters where the primary subplot is developed.

In comparison, my Bitterwood novels all have at least a dozen point of view characters, and more interweaving subplots than I can count.

But, I wasn’t aiming for epic fantasy. I was shooting for a page-turning pulp adventure featuring atomic supermen and space aliens drifting along dark desert highways. This is the sort of novel I used to devour on a single summer afternoon when I was a teenager. On the other hand, this novel isn’t mental junk food filled with empty calories. I think I manage to get to moments in the book that will prove thought provoking, and other moments that will provide genuine emotional catharsis. It’s a book I’m proud of, and can’t wait to get into the hands of readers.

You can also read James Maxey’s post “Five tricks for writing a novel in a week” here. The full text of the first draft of Burn Baby Burn is available permanently for free on Maxey’s Web site, though Maxey says “it may be a bit of a slog to read since I didn’t bother fixing the formatting for the web.” He plans to release a final, polished version for Kindle in October.

Luc Reid is a Writers of the Future winner whose fiction and nonfiction have also appeared in Clarkesworld, Strange Horizons, Abyss & Apex, and other venues. He’s the founder of the Codex online writers’ group; author of Talk the Talk: The Slang of 65 American Subcultures (Writers Digest Books, 2006); and a former radio commentator. He blogs about writing and the psychology of habits at LucReid.com, and his eBook The Writing Engine: A Practical Guide to Writing Motivation, is available for PDF download on his site (free) as well as for Kindle. His latest book, also available for the Kindle, is a young adult novel of backwoods sorcery in Vermont called Family Skulls.

2 thoughts on “Writing a Novel in One Week”