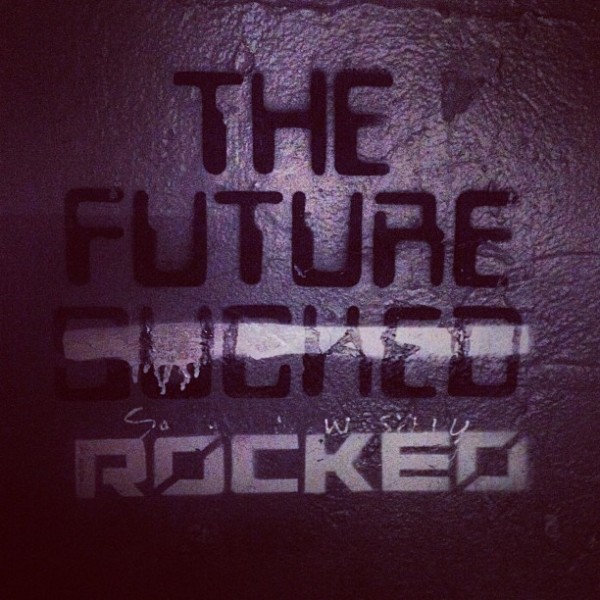 Atemporality, eh? [Spotted by the freshly deracinated Tim Maughan, currently on foot patrol in NYC, who noted that both of those futures — and, implicitly, all futures — are in the past tense.]

Speaking of the quotidian grab-bag, here’s an interesting project: remixdemix. I’m not quite sure whether it’s satirizing the tendency of futures thinking to turn into buzzword bingo or not, even though it seems to have been posted in the spirit (and to little response) at FastCo. I’m not sure whether to ‘read’ it as art or as a futures exercise; Tschäppeler is messing around with the fuzzy line between clever design fiction and outright hoaxing that Bruce Sterling talks about a lot lately, and which various colleagues (most notably Justin Pickard) have been worrying at for a while. So maybe this thing of Tschäppeler’s is a spoof, a design metafiction, y’know? But the ten example ‘visions’ on the website have that authentic wild-card feel about ’em, too well informed and chewy to be pure pisstaking, even as they splodge marks right across the TED bingo-card. Pop will eat itself.

Talking of buzzwords masquerading of knowledge — d’you remember my chat about fan-fiction futurism with one Mister Dan Abelow a while back? (Yes, yes, I’ve been busy landing a doctoral studentship, sorry.) After writing that post, I was left with a nagging feeling that I knew Abelow from somewhere else, and I did a bit of INTERNETS  to find out why that might have been. And it turns out that Abelow is the author of a set of patents which a company called Lodsys licenses to a number of the major tech companies for a great deal of money; Lodsys in turn bought a part stake in said patents from another firm called Intellectual Ventures. Lodsys has spent the last 18 months wringing settlements out of a massive list of big tech companies, but Kaspersky stuck it out and went to court… which led to Lodsys filing to dismiss its suit against Kaspersky earlier this week.

Put it this way, Techdirt routinely labels Lodsys as a patent troll operation. If you search around a bit, you can probably find the original Abelow patents in question; while I’m certainly not questioning their legal validity, they’re clearly about as devoid of content as Abelow’s “futurism” on the WFS front page… which, incidentally, seems to be a running sales pitch for the promising bounty of his newest “Expandaverse” patent, which you can read — all 1,533 dead-tree pages of it, as pictured on that linked page; I’d embed the image here, but I can’t be bothered with the DMCAs — right after you sign an NDA and/or buy a license.

Go and read the excerpts on that page, though; it seems to be little more than an amalgamation of every skiffy cyberspace-interface virtuality cliché bundled into one horribly branded lump, a tangled fatberg-ratking of painfully obvious and already-done useability woo which could be claimed to apply to pretty much anything with an internet connection. A cynic might even suggest that was the point of the exercise… but I’ll settle for saying it’s a bit odd that the WFS are essentially letting Abelow use their site as a shop-window for his patent-pending concepts and fan-fic sales pitches; it’s a relationship that does Abelow a lot more favours than it does the WFS.