Scientists have developed a technique for confining light within a bottle:

Similar to the motion of a charged particle stored in a magnetic bottle, i.e., a particular spatially varying magnetic field, the light oscillates back and forth along the fiber between two turning points. For this reason, this novel type of microresonator realized by the physicists in Mainz is referred to as a bottle resonator. Tuning the bottle resonator to a specific optical frequency can be accomplished by simply pulling both ends of the supporting glass fiber. The resulting mechanical tension changes the refractive index of the glass, so that depending on the tension, the round-trip of the light is lengthened or shortened.

This could lead to the creation of a glass fibre quantum interface between light and matter, which in turn is an important component of hypothetical quantum computers and quantum communication systems. 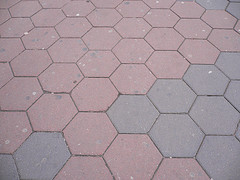 More developments in the field of ultracapacitors, this time using graphene (like a single layer of the graphite molecule, apparently), from researchers at the University of Texas:

“Through such a device, electrical charge can be rapidly stored on the graphene sheets, and released from them as well for the delivery of electrical current and, thus, electrical power,” says Rod Ruoff, a mechanical engineering professor and a physical chemist. “There are reasons to think that the ability to store electrical charge can be about double that of current commercially used materials. We are working to see if that prediction will be borne out in the laboratory.”

My understanding is that a key part of solving the two problems of anthropogenic climate change and the depletion of primary energy resources involves finding new and more efficient ways of storing energy.

Ultracapacitors are on option, synthetic petrol is another, or hydrogen fuel cells.

It will be interesting to see which technology (if any of these) becomes dominant as a means of storing energy. 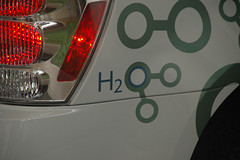 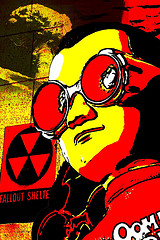 The weather is a fickle thing.  Typically, riding my bicycle to work is hard going and easy coming home because of wind patterns, but sometimes the wind decides to switch, or perhaps not blow at all, really messing with my commute.  Thus the problems with wind energy.  The wind doesn’t blow all the time, and it may decide to quit right at peak hours, or blow up a storm when no one’s using electricity.  So what to do?

A test wind park in Iowa, as described by Environmental Science & Technology, proposes to help solve these problems by using excess wind energy to store compressed air in underground aquifers until such time that demand rises.  This maximizes the turbines’ efficiency and allows companies to sell energy when they can make the most from it and when demand is highest – peak hours.

This could be a real boon to wind farms, making it more economical than it already has become to run turbines.

(via SciTechDaily) (image from article)