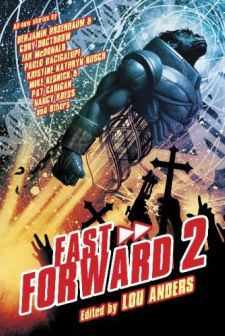 The first thing I’m going to mention about Lou Anders‘ second Fast Forward anthology is the John Picacio cover artwork, which is a real Zeitgeist catch. Below is strife, carnage, religious angst; thrusting upwards is bionic monkey-man, his chains broken asunder, transcending mundane squabbles for the promise of space and rationalism (bubble chamber tracks?). The religious discord is heightened by the DNA motif, explicitly repeated in the exhaust blast of robomonkey… if you wanted to encapsulate the hope for a triumph (or at least secession) of a rational worldview, I think you’d struggle to make a more arresting and vivid image in the process.

So, how does Fast Forward 2 match up to this thrusting visual metaphor? END_OF_DOCUMENT_TOKEN_TO_BE_REPLACED