My magical statistics monkeys tell me that last week’s post on dissociative fugues was surprisingly popular, so I thought I’d share another article I found fascinating. Yet another hat-tip to Geoff Manaugh at BLDGBLOG for this one; it’s a Scientific American report on naturally occuring nuclear reactors. Yes, you read that right – nuclear power plants that just happened by geological chance.

More than two tons of this plutonium isotope were generated within the Oklo deposit. Although almost all this material, which has a 24,000-year halflife, has since disappeared (primarily through natural radioactive decay), some of the plutonium itself underwent fission, as attested by the presence of its characteristic fission products. The abundance of those lighter elements allowed scientists to deduce that fission reactions must have gone on for hundreds of thousands of years. From the amount of uranium 235 consumed, they calculated the total energy released, 15,000 megawatt-years, and from this and other evidence were able to work out the average power output, which was probably less than 100 kilowatts—say, enough to run a few dozen toasters.

It is truly amazing that more than a dozen natural reactors spontaneously sprang into existence and that they managed to maintain a modest power output for perhaps a few hundred millennia. Why is it that these parts of the deposit did not explode and destroy themselves right after nuclear chain reactions began? What mechanism provided the necessary self-regulation? Did these reactors run steadily or in fits and starts?

Go read the whole thing; the science isn’t too heavy, and it’s a pretty wild idea. I’m pretty sure I’ve read about something similar in a Stephen Baxter novel (though I can’t for the life of me remember which one); at the time I assumed he was speculating in a vacuum, but I guess I should have known better. 🙂

Regarding the popularity of the dissociative fugues post, I’ve been wondering whether perhaps I should be spending more time linking to interesting stuff and less time waffling around on tangents? It’s you guys who read this stuff, so what would you like to see here – more random points of interest, more speculative ramblings, or a blend of the two?

Energy crisis? What energy crisis? You’ll be laughing all night in your floodlit garden under the gaze of your jealous fossil-fuel using neighbours once you’ve got Hyperion’s clean, safe and portable[1] backyard nuclear reactor up and running! 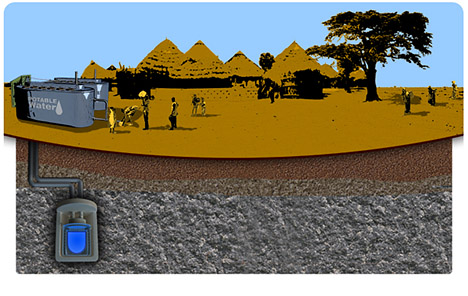 Yes indeed; using good clean water as both moderator and coolant, the Hyperion reactor simply cannot become a runaway reaction, and the uranium hydride fuel is useless for making weapons with – so you’ll not get any politically-motivated sanctions imposed on you by coalitions of powerful nation-states!

The Hyperion reactor will start shipping in the summer of 2013, so start saving now! Or alternatively take out a loan based on the projected amount of energy you’ll be able to sell back to an increasingly desperate and expensive national grid – provided you can find a bank that’s guaranteed not to collapse[2], or a cooperative government administration to bail you out when the worst happens.

[ 1 – 2.5m tall concrete unit can be transported by most commercially-available heavy plant machinery. ]

[ 2 – You may want to consider researching financial institutions based in China or other Asian nations. ]

[Story originally found at grinding.be; image from Hyperion’s website, and there’s an interview with surprisingly lucid and woo-free Hyperion CEO; please note snarky tone of post is a form of gallows humour after an hour of wading through the day’s news.]