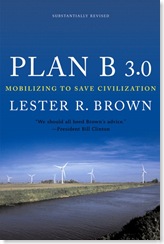 So listening to Science Friday’s podcast today, one of the topics was Lester Brown of the Earth Policy Institute, an organization dedicated to preventing us from screwing up our planet any more than it already is. He’s come out with the latest version of his book, the 3rd edition of his book called, appropriately, “Plan B 3.0”. In it, he discusses the usual energy crisis, but he also carries it further, describing water wars, the effects of biofuels on food prices, etc. Brown also discusses some things that can be done to rectify these problems. It’s not terribly upbeat, however, as the fixes are rather more politically radical than anything we Americans have heard.

Ok, so it’s not SF, but the speculation is pretty good, and if it doesn’t motivate you to do something, it might just plant the seed for an entertaining story. Check out the book here, the first chapter or so is available free now, and the whole book will be released free later this week. Now that’s a promotional offer!