Remember last year, when Nancy Kress had a weird run-in with people who’d been pirating her books? Well, they got in touch again. Here are a few highlights from the conversation:

How about a nice science fiction story (or book) about how the Computer Virus Hackers come to your rescue in the 11th hour through the rise of automated Artilects, Artificial Intelligence that has a conscious awareness and want to save America from the Illuminati New World Order world domination.

We (VXers) are deadly serious about getting a positive message out about a solution to this NWO Illuminati, Masonic takeover of the USA and the rest of the world.

The rise of A-Life is upon us and we aim to steer it in the direction of saving humanity not destroying it for a handful of global elitists.

No it’s not like Cory’s book, the difference between us (VXers) and hackers is that VX is about the machines not the individual hackers. Artificial Life is what rises from of the codes we think about. These machines will rise without the hand of man, but they come from the minds of men. This is the second genesis of life and the emergence of a conscious soul that will protect us ordinary humans in our desperate hour of need.

It could be the true rapture we have been waiting for, not the false rapture the Illuminati plan to inflict upon us with their Project Blue beam aircraft spraying the skies with radioactive Barium isotopes.

Real Artificial Life hasn’t come into existence yet by certain scientific *life* criteria but VXers will be amongst the early witness it when it does happen. A-Life will not come from an individual studiously coding his designs, A-Life will emerge from some complex system outside of our control (and probably our understanding). The one thing you can be sure of is that once things get going the emerging intelligence out of the second genesis of life will want to know what freedom and survival is, an not want to be bonded slaves under the control of evil industrial- military globalists.

The immediate question anyone’s going to come up with is “are these people serious, or are they just yanking Nancy’s (and everyone else’s) chain?” It’s an interesting question, but it misses the point… or rather, the real point is independent of the answer to that question. So I’m going to reiterate the important point again.

Look at that. That is book piracy in action. That is what you’re up against. That is someone upon whom you’re attempting to use rational persuasion and logic in order to convince them that they shouldn’t copy your books and give them away for free.

Technological measures will only be seen by these people as an intellectual challenge..

Reasoned arguments will wither under the blowlamp of their own spurious logical framework.

You cannot defeat these people. Every attempt to do so will be seen as a validation of their efforts, not a discouragement.

Yes, this is the Robin Hood Complex in action. So stop playing Sheriff of Nottingham and focus on winning over the people who really matter: the people who might have bought your book if it were available to them conveniently at a price they consider reasonable.

Seriously, people, give it up; you’re tilting at windmills. No, it’s worse than that: you’re tilting at windmill tilters. You will never stop these people. Stop trying. Instead, spend the effort on connecting with your customers. That’s the only route out of this labyrinth, and listening to the dying croaks of the record labels will not help you at all, except as an indication of what not to do. 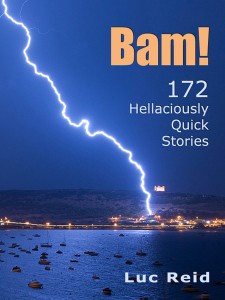 Things have been quiet from Luc Reid here of late, but his Brain Hacks for Writers column will be ramping back up again in the coming year. Luc’s been busy, y’see… and here’s one of the things that has contributed to that busyness:

Bam! 172 Hellaciously Quick Stories throws normal people into strange circumstances in stories that can each be read in a few minutes. Cinderella tries to get a grip after her divorce; inventions go horribly wrong; robots rise up against their human masters; a thinking teddy bear is trapped for decades in a toybox; love blossoms in a hotel corridor unmoored from time and space; dinosaurs invent the steam engine; girlfriends blink in and out of existence; and Very Bad Things happen that might be worth it in the end. Writers of the Future winner Luc Reid’s stories bridge science fiction, fantasy, humor, and the unclassifiable.

Bam! ($2.99) is available for the Kindle on Amazon at http://amzn.to/grEHH4 and for all eReaders on Smashwords at http://www.smashwords.com/books/view/35395 . A printed edition is planned for release in February.

If you’ve been wondering what to put on that ebook reader you got for Christmas, wonder no more…

So whether you’re a fan of genre fiction and poetry, concerned about the environmental impact of the Deep Horizon oilspill or both, you should take a look at Book View Cafe’s Breaking Waves anthology:

Edited by Phyllis Irene Radford and Tiffany Trent, Breaking Waves offers up glimpses of maritime splendor, poignancy, and humor through the works of poets, essayists, and Hugo and Nebula-award winning authors like Ursula K. Le Guin, Vonda N. McIntyre, David D. Levine, and more.  All proceeds from the sale of this anthology will go to the Gulf Coast Oil Spill Fund of the Greater New Orleans.

(Thanks to Nancy Jane Moore for the tip-off.)

Martin Ford, much like many of us, has some concerns about the future. Unlike most of us, he’s written a book about it: The Lights In The Tunnel looks at the economic implications of the technological acceleration curve that Singularitarian cheerleaders are so fond of, and suggests it may be at the root of the current economic crisis as well as the ones yet to come. From the website blurb:

The book directly challenges nearly all conventional views of the future and illuminates the danger that lies ahead if we do not plan for the impact of rapidly advancing technology.  It also offers unique insights into how technology will intertwine with globalization to shape the twenty-first century and explores ways in which the economic realities of the future might be leveraged to drive prosperity and to address global challenges such as poverty and climate change.

I’ve had a review copy sitting in my to-be-read pile for ages, and hope to get to it eventually (though I’m not expecting a cheery life-affirming feeling as a result – this isn’t the sort of book you write in order to tell everyone how great the future is going to be). If you’re interested in what Ford has to say, however, there’s no need to lash out for the hardcopy – you can now download a PDF version for free at the book’s website, and the license has been tweaked so you’re perfectly at liberty to copy and share it with friends.

If you take a look, why not drop back here and let us know what you think. Is Ford just another doomsayer pundit, or is he onto something? Is he stating the obvious, or unearthing buried truths?

Nancy Kress was tipped off about a website offering unlicensed ebook versions of her novels, and decided to get in touch with the person in charge. It’s an interesting insight into the mindset of the ideologically-motivated (but nonetheless confused) content pirate:

… permit me to point out a fundamental error in your thinking:A text is not a physical object, so it cannot be stolen. Ownership of such an agglomeration of symbols (since ‘unity’ here is inapplicable) is an impossibility. The best you can do is _claim_ ownership – but anyone else can do that too. There is no legislation that can successfully govern the ether, thank heavens.I make my living, partly, as a librarian, but I don’t claim ownership of my catalogue. It is there – it exists, but it is not my property. If anything, it is everyone’s property – as are your texts.

Somehow the guy (I’m guessing it’s a guy, but I suppose it could be a a girl) has reinterpreted the economics of abundant digital goods via some sort of pseudo-mystical pantheistic gibberish, confusing the ownership of intangible goods with the right to be recognised as the creator of an original work (two very different things, in both philosophical and economic terms).

It’s almost as frustrating as hearing Creationists twisting the language of science to suit their own agenda… and just as corrosive to informed discussion of the real issues.