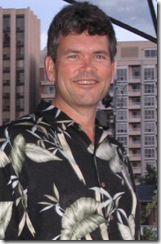 First posts are fraught with danger–"you never get a second chance to make a first impression," and all that–but at least in this instance the nerve-wracking decision of what to post about has been taken out of my hands: I’m supposed to introduce myself. (Which also removes the fear of blabbing on about something I know nothing about, I suppose: bonus!)

So. I’m Edward Willett, one of your new Futurismic bloggers. My interest in science fiction goes back to childhood, thanks to the corrupting influence of my two older brothers, and my interest in science stems very much from my interest in SF. I was born in New Mexico, but moved to Weyburn, Saskatchewan, Canada from Texas when I was eight. I studied journalism and art at Harding University in Arkansas, then returned to Weyburn, where I was a newspaper reporter/photographer/columnist/editor/cartoonist (it was a smallish paper) for eight years, before chucking it all in and becoming communications officer for the Saskatchewan Science Centre here in Regina, where I now live.

In 1993 I dumped the workaday life to become a fulltime freelance writer. I’m the author of more than 30 books. First came computer books, then I branched into children’s nonfiction, which I continue to write, on topics that have run the gamut from Ebola Virus to the Iran-Iraq War to biographies of Jimi Hendrix, Orson Scott Card, Janis Joplin and J.R.R. Tolkien (coming soon: Johnny Cash and Andy Warhol!). I’ve also written adult non-fiction, including Genetics Demystified for McGraw-Hill.

I’m the administrative assistant for SF Canada, the association of professional speculative fiction writers of Canada, and maintain the SF Canada news blog. My own personal blog is here.

I write a weekly newspaper science column, which I also podcast. I’m married to a telecommunications engineer and have one daughter. (Oh, and on the side, I’m a professional actor and singer, so if I sneak in a few references to SFnal musical theatre productions, you’ll know why.)

Whew! I’m glad that’s out of the way. That’s way more than enough about me. Now I can think about my first real post…